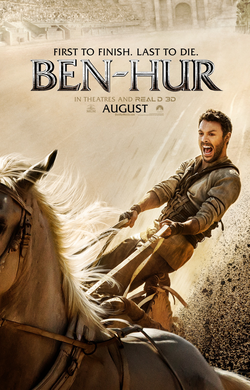 The fifth feature film telling, of the 1880 novel 'Ben-Hur: A Tale of the Christ' (by Lew Wallace). It of course begs for comparisons to the Academy Award winning 1959 blockbuster, starring Charlton Heston, and no one should be surprised that it's horrendously inferior. This version was directed by the Russian-Kazakh genre film director Timur Bekmambetov; who's most well known for helming 'DAY WATCH', 'NIGHT WATCH', 'WANTED' and 'ABRAHAM LINCOLN: VAMPIRE HUNTER'. This film definitely doesn't live up to any of those either. It was scripted by Keith Clarke and John Ridley (who amazingly also wrote the Academy Award winning '12 YEARS A SLAVE'). The movie stars Jack Huston, Toby Kebbell, Morgan Freeman, Nazanin Boniadi, Ayelet Zurer and Rodrigo Santoro. It was savaged by critics, and the Box Office alike. I pretty much hate it.

The movie recounts the story of Judah Ben-Hur (Huston); a nobleman who was falsely accused of treason, by his adoptive brother (turned Roman army officer) Messala (Kebbell). Judah then became a slave (for five years), on a Roman slave ship, before escaping. He returns home and challenges Messala to a chariot race. The entire time he keeps having mystical encounters with Jesus (Santoro).

The film is extremely slow-paced, uninvolving and dry (really dry). The acting is almost all bad, and the characters aren't at all likable. I could barely stay awake, for a lot of it, and I couldn't wait for it to be over; 2 hours is way too long for this (even though the 1959 epic is over 3.5 hours long). I expect so much more from Bekmambetov, and such a classic story! The chariot race is still pretty cool though.
at 4:16 PM
Labels: Ben Hur (2016), Jack Huston, MGM, Morgan Freeman, Paramount Pictures, Reviews, Timur Bekmambetov