"The Shallows" Review by Tim Hellman 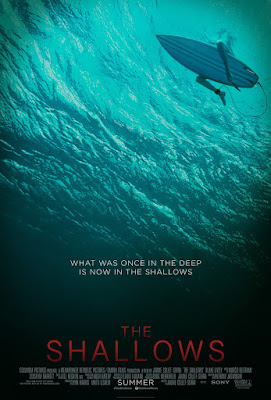 'THE SHALLOWS': Four Stars (Out of Five)

The new 'killer shark' horror flick, starring Blake Lively (Mrs. Ryan Reynolds!). The film tells the story of a surfer, that's stalked by a great white shark; just 200 yards from shore. It was written by Anthony Jaswinski, and directed by Jaume Collet-Serra; who's also helmed such other horror flicks as 2005's 'HOUSE OF WAX' remake, and 2009's 'ORPHAN' (as well as three Liam Neeson action movies). The film has done surprisingly well at the Box Office, and it's also gotten mostly positive reviews from critics (and audiences) as well. I loved it.

Lively plays Nancy; a medical student, that decides to go surfing at the same remote Mexican beach that her mother did, many years earlier, when she was pregnant with Nancy. Her mother recently passed away, and Nancy is thinking about dropping out of school (because of it). While surfing, Nancy is attacked by a great white shark (just 200 yards from shore). She then becomes stranded on a reef, with a wounded leg, where the shark continues to relentlessly stalk her.

The movie is one of those classic survival horror flicks. It's cheesy (at times) and a little unbelievable, but it's still suspenseful; and a hell of a lot of fun! Lively delivers a great performance in it, and I enjoyed Collet-Serra's stylistic direction (the movie always looks beautiful). Even though it seems like it could be a rather slow-paced film, it never is (it pretty much flies by). I'd definitely recommend it.
at 6:35 PM
Labels: Blake Lively, Columbia Pictures, Reviews, The Shallows