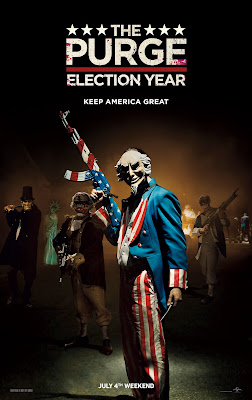 'THE PURGE: ELECTION YEAR': Four Stars (Out of Five)

The third installment in the popular horror flick franchise; this one adds some political commentary, to the social science fiction/horror series. It deals with a popular Presidential candidate, that's targeted for execution on 'Purge' night; due to her promise to eliminate the controversial ritual. James DeMonaco returned to write and directed the movie (as he did the last two installments) and Frank Grillo (who starred in the first sequel) returned to star in the film. The movie also costars Elizabeth Mitchell, Mykelti Williamson, Terry Serpico, Betty Gabriel, Joseph Julian Soria, Kyle Secor and Edwin Hodge (who also costarred in the original flick). Once again (like the previous two movies) the film has been (mostly) well received by critics and viewers alike; I really enjoyed it as well.

Grillo reprises his role as Leo Barnes; a former police sergeant, that almost murdered the man who accidentally killed his son (on a previous 'Purge' night). He's now the head of security, for Presidential nominee Senator Charlie Roan (Mitchell). The two have made it their obsessive mission, to end the annual ritual, and the Senator is gaining a lot of support for it. The 'New Founding Fathers of America' created the 'Purge', to drastically reduce the poor population, and they'll now do anything to stop Roan. They remove a 'Purge' rule, for the first time ever, that protects top Government officials; in order to take her out. Barnes and Roan end up on the streets, banding with other survivors, in order to try to make it through the night (alive).

The movie has a lot of the same creepy (and highly disturbing) thrills, and high-energy action scenes, as the previous two films. It hasn't lost any of it's strengths, impressively, this third time around. It's also added some pretty insightful political commentary, to the already impactful social commentary, and it's very effective (and timely) as well. Senator Roan does show a lot of strong similarities to Bernie Sanders; and you can argue that her opponent greatly resembles Ted Cruz. The controversy over 'Purge' night can also easily be compared to the heated debate over gun rights. There's a lot of interesting parallels, to modern politics, that can be found in this movie. Besides that, it's just a great action-horror flick. Fans of the series won't be disappointed.
at 4:47 PM
Labels: Reviews, The Purge: Election Year, Universal Pictures