"The Lobster" Review by Tim Hellman 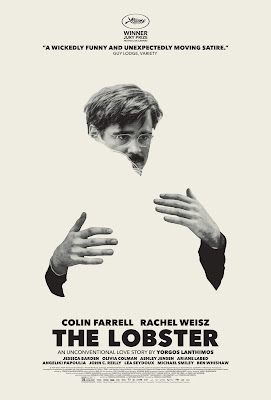 'THE LOBSTER': Four and a Half Stars (Out of Five)

A very dark dystopian comedy-drama flick; about a world where single people are required to find romantic partners, within 45-days, or be turned into animals. The film was directed by Greek filmmaker Yorgos Lanthimos (in his English-language film debut) and it was written by Lanthimos and Efthymis Filippou; the duo also performed the same duties on 2011's 'ALPS' and 2009's 'DOGTOOTH' (which is an outstanding flick). It stars Colin Farrell, Rachel Weisz, Lea Seydoux, John C. Reilly, Ben Whishaw, Olivia Colman, Jessica Barden and Angeliki Papoulia (who also costarred in 'DOGTOOTH'). The movie has been a critically praised indie hit, and I think it's a near masterpiece.

The film is set in a dystopian world; where single people are sent to a special hotel, once they become single, and they're required to find romantic partners there (within 45-days). If they fail to do so, they're turned into an animal, of their choice, and released into the woods. People who escape the hotel are known as loners; they live out in the woods, as their own community. Loners have similar strict rules (to the contrary); prohibiting any romantic (or sexual) relations. Single people are sent into the woods, to hunt the loners down; if they're successful, they're given an extra day to find a partner. The story revolves around David (Farrell); who was recently dumped by his wife, for another man, and he's sent to the hotel (as the movie begins). David is guided through this stressful process, by his brother; who's now a dog.

The film is extremely odd, and funny; but it's also very disturbing. It's shockingly brutal, and sexual, at times. It's also an excellent social commentary, on the world we now live in. That's what I like most about the film; it's definitely exaggerated (in a very dark satirical way), but it's also a great analysis of our society's obsession with not being single. Single people our often ostracized, and severely looked down upon (by the rest of society). This movie isn't really that far off, in the way it illustrates how couple's often harshly treat singles. It's also true that most people follow very strict (and severely superficial) guidelines, in finding romantic partners. Most relationships are formed out of desperation, necessity and drastic conformity. Genuine companionship, and true love, is extremely rare. That's why this movie is so brilliant; it's a nearly perfect examination on life (I'd say). It will be seen as far too weird, slow and harshly critical; for most viewers though.