"The Legend of Tarzan" Review by Tim Hellman 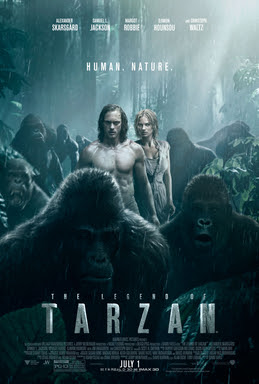 'THE LEGEND OF TARZAN': Four Stars (Out of Five)

The newest film adaptation of Edgar Rice Burroughs' legendary character 'Tarzan'; who first appeared in the novel 'Tarzan of the Apes', in 1912 (it was followed by 25 sequels). This movie tells the story of Tarzan's return to the African jungle (where he was raised by apes), after adapting to a civilized life in London. He's called back to investigate the corrupt activities of a Belgian King there, and then he's lured into a trap by a tribal chief. The film stars Alexander Skarsgard, in the title role, and it costars Samuel L. Jackson, Margot Robbie, Christoph Waltz and Djimon Hounsou. It was directed by David Yates (who also helmed the last four 'HARRY POTTER' movies) and it was written by Adam Cozad and Criag Brewer (who also wrote and directed 'BLACK SNAKE MOAN', starring Jackson). The movie is packed with beautiful visuals, and some pretty decent action scenes; it's definitely a lot better than the critics would like you to believe.

John Clayton III, also known as Tarzan (Skarsgard), was raised by apes in the African Congo jungle; after his parents were murdered by other (more vicious) primates. As an adult, Tarzan meets a woman, named Jane Porter (Robbie), and the two marry and move to London together. Tarzan becomes totally adapted to the civilized world, but he's later asked to return to his home; by a Belgian king. Initially Tarzan rejects the idea, but an American, named George Washington Williams (Jackson), persuades him to accept the offer. Williams believes the king is enslaving the people there, and he wants proof of it.

The movie had a budget of $180 million; and you can see just about all of it, up on screen (the visuals are breathtaking). Skarsgard is a pretty flawless Tarzan (especially his amazing physique), and I really enjoyed the movie's darker (more adult) tone; compared to most of the 'Tarzan' movies I grew up with. The film is a little slow-paced, at times, but it's mostly a lot of fun. It's also a great film for animal lovers, much like'THE JUNGLE BOOK' (from a couple months ago). If you really love animals, it's hard not to appreciate a film like this.
at 4:31 PM
Labels: Alexander Skarsgard, Christoph Waltz, Margot Robbie, Reviews, Samuel L Jackson, The Legend of Tarzan, Warner Brothers