"Now You See Me 2" Review by Tim Hellman 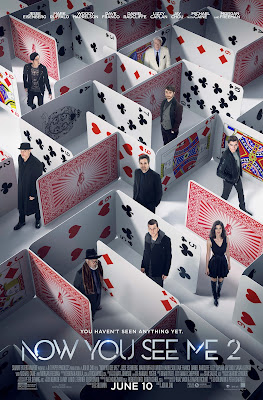 Sequel to the 2013 surprise 'caper flick' hit; about a group of four illusionists, that rob from the rich and give to the poor, during elaborately staged magic shows. This installment has the magic team being forced to pull off their most challenging heist yet, for a greedy tech genius. Jesse Eisenberg, Mark Ruffalo, Woody Harrelson, Dave Franco, Morgan Freeman and Michael Caine all reprise their roles (from the original movie); while Lizzy Caplan, Daniel Radcliffe and Sanaa Lathan join the cast (Isla Fisher is noticeably absent, due to her recent pregnancy). Jon M. Chu directed the flick (he's previously helmed films like 'G.I. JOE: RETALIATION', two Justin Bieber documentaries, and two 'STEP UP' sequels), and it was written by Ed Solomon (who also co-wrote the original movie) and Peter Chiarelli. The film is definitely a lot of fun, and consistently entertaining throughout (just like the original).

The remaining three members of the famous illusionist team, known as the Four Horsemen (Eisenberg, Harrelson and Franco), have been hiding out for a year. The FBI is still on their trail, and FBI mole, Dylan Rhodes (Ruffalo), is still protecting them. Then Rhodes helps them setup another elaborate magic show heist, that goes horribly wrong. The team wakes up in China, and finds themselves being blackmailed into another caper; by a tech genius named Walter Mabry (Radcliffe). A witty magician named Lula May (Caplan) joins the crew, on this new mission.

I'd say if you're a fan of the original flick, you'll probably like this sequel just as much (or close to it). It's filled with all the same cool magic tricks, detailed (and impressively involving) heists, and witty banter. The cast is all great again (I'm a huge fan of Eisenberg's) and Caplan is an awesome addition to the cast (she's definitely an improvement over Fisher). I can't really see any major faults in it; and at over two hours, it impressively flies by!
at 4:06 PM
Labels: Daniel Radcliffe, Dave Franco, Jesse Eisenberg, Lizzy Caplan, Mark Ruffalo, Michael Caine, Morgan Freeman, Now You See Me 2, Reviews, Summit Entertainment, Woody Harrelson