"Lights Out" Review by Tim Hellman 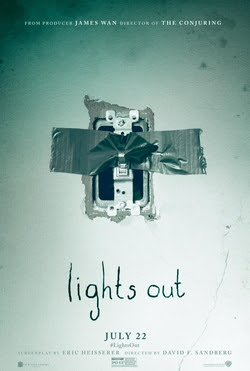 'LIGHTS OUT': Four Stars (Out of Five)

Supernatural horror flick; about a violent spirit, which can't survive in the light, that's stalking a young woman and her brother. The film was produced by horror master James Wan, and it was directed by first time feature filmmaker David F. Sandberg. It was written by Eric Heisserer, and it's based on Sandberg's 2013 short film (of the same name). The movie stars Teresa Palmer, Gabriel Bateman, Maria Bello, Alexander DiPersia and Billy Burke. It's surprisingly received (mostly) good reviews from the critics, and it's also performed admirably well at the Box Office (so far). I enjoyed it.

The movie tells the story of a young woman, named Rebecca (Palmer). Rebecca learns that her unstable mother (Bello) is off her medication again. Her brother, Martin (Bateman), is struggling at school because of it; due to the fact that he's getting very little sleep. Rebecca brings Martin home to her house, and she soon learns that he's being haunted by an evil spirit; which can only survive in the dark.

The film is a little clichéd, and routine (in story); but it's also really well made, and filled with great haunting imagery. The concept (of a ghost that can't survive in the light) plays out really well, in frightening imagery. The film is scary, and the performances are all decent (except for maybe the young boy). The fact that the script, and characters, might be a little poorly written, doesn't effect the suspense quality of the movie. If you're looking for good scares, that's probably what you'll get.
at 5:57 PM
Labels: James Wan, Lights Out, New Line Cinema, News, Stills, Teresa Palmer, Trailer, Warner Brothers