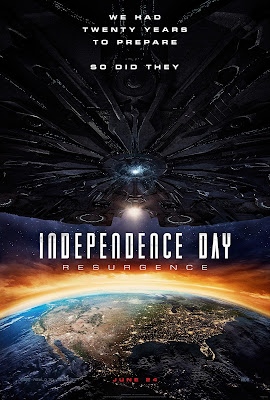 'INDEPENDENCE DAY: RESURGENCE': Three and a Half Stars (Out of Five)

The sequel to the 1996 blockbuster sci-fi epic, about a massive alien invasion on Earth. This sequel takes place 20-years after the events of the first movie, when the alien invaders return with reinforcements. Many of the lead actors, from the original film, reprise their roles in this installment; including Jeff Goldblum, Bill Pullman, Judd Hirsch, Vivica A. Fox, Brent Spiner and William Fichtner. Will Smith did not return, due to budget restraints (and Smith's self absorbed ego), but Liam Hemsworth, Maika Monroe, Jessie T. Usher, Travis Tope, Charlotte Gainsbourg and Sela Ward joined the cast. Roland Emmerich and Dean Devlin returned as co-writers and co-producers of the flick, and Emmerich also (once again) directed this sequel. The film feels very similar to the original hit, but not quite as good.

The story picks up 20-years after the events of the first movie, when the United Nations has created a global defense system, called Earth Space Defense; which uses technology left behind by the defeated aliens. The aliens, of course, return to Earth, with an even bigger army of reinforcements; and an obsessive intent to take over the planet, and harvest it for their own. The central characters include David Levinson (Goldblum) and former U.S. president Thomas Whitmore (Pullman), once again, as well as Whitmore's daughter Patricia (Monroe), her boyfriend, ESD pilot Jake Morrison (Hemsworth), and Dylan Dubrow-Hiller (Usher); the son of Steven Hiller (Will Smith), who's now deceased.

The movie almost feels like a remake, rather than a sequel, but it is (somewhat) nostalgic seeing all of the characters again. The visuals are breathtaking, and the alien battles are cool. The film is almost as good as the original, except no Will Smith; Hemsworth definitely doesn't cut it (as a substitute). I remember when I saw the first movie, for the first time, and Will Smith was awesome in it; he was this really charismatic blockbuster star, just starting out. That's what this sequel is truly lacking.
at 4:11 PM
Labels: 20th Century Fox, Independence Day: Resurgence, Liam Hemsworth, Maika Monroe, Reviews