"Hillary's America: The Secret History Of the Democratic Party" Review by Tim Hellman 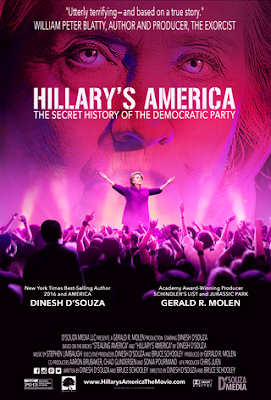 'HILLARY'S AMERICA: THE SECRET HISTORY OF THE DEMOCRATIC PARTY': Zero Stars (Out of Five)

The new propaganda documentary flick, from writer/director Dinesh D'Souza (the man who also brought us the 2012 hit '2016: OBAMA'S AMERICA'). D'Souza once again co-wrote and co-directed the movie, this time with Bruce Schooley; the two filmmakers also co-wrote and co-directed the 2014 exploitation documentary flick 'AMERICA: IMAGINE THE WORLD WITHOUT HER'. In this film, D'Souza and Schooley analyze what (they think) presidential nominee Hillary Clinton's true motives are; by also examining the history of the Democratic Party. Like 'OBAMA'S AMERICA', the film is yet another attempt to sway the upcoming presidential election. It's gotten almost unanimously negative reviews from critics; and it's scored an average rating of 1.5 out of 10, on the website Rotten Tomatoes! I agree; it's one of the worst movies I've ever seen.

The film begins with D'Souza explaining how (he thinks) the U.S. government unfairly treated him, for his unlawful campaign donations (to a politician friend). D'Souza believes President Obama was seeking revenge, for his 2012 documentary film ('2016: OBAMA'S AMERICA'), by giving him a much harsher sentence than he deserved. D'Souza than goes on to explain that the Democratic Party has always had sinister motives, since it's conception, and Hillary Clinton is yet another villain of that party. Republicans are the true 'champions of justice and equality', according to this movie.

Being a progressive Independent, I definitely don't agree with D'Souza's politics; but I'm also not a fan of Hillary Clinton (at all), or the Democratic Party either. Even putting all politics aside though, this film is just really poorly made. D'Souza is one of the worst filmmakers of recent times (he's also a horrible actor), but this movie actually makes 'OBAMA'S AMERICA' look somewhat aptly made! The film's 'talking points' are completely irrational, and the filmmakers often contradict themselves (throughout the entire movie). The narrative makes no sense either. The majority of the film is told through really poorly done (and extremely corny) reenactments; that are filled with atrocious acting, and unbearable melodrama. These scenes are also extremely cartoonish too (and ridiculously over-the-top); making the movie feel much more like a historical spoof, than a serious documentary film! The movie actually reminds me (a lot) of'DRUNK HISTORY' (because of this); but it's also painfully boring. For a large chunk of the film's running time, I also wondered if D'Souza would ever bring Hillary Clinton into the story (he finally does, in the movie's final 30 minutes). I also wonder what D'Souza would have done, with the film, if Bernie Sanders had won the Democratic nomination. Would he have re-shot those portions of the movie, and re-titled the film 'Bernie's America'? What kind of possible 'sinister motives' could D'Souza have tried to attribute to Sanders, and how would it have fit with the rest of the movie's narrative (being that Bernie Sanders was always an Independent, before this election)? Worst of all, the film just left me feeling really dirty (like really nasty exploitation flicks often do); I felt like I needed to rush to take a shower, when it was finally over! This film definitely won't be swaying anyone's vote, that's for sure.
at 5:53 PM
Labels: D'Souza Media, Documentary, Hillary's America: The Secret History Of the Democratic Party