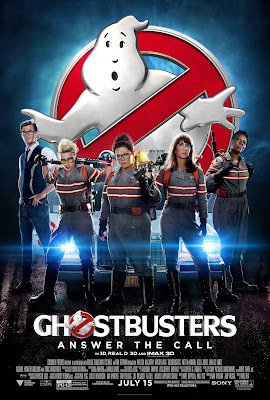 'GHOSTBUSTERS': Four and a Half Stars (Out of Five)

A reboot to the classic 1984 sci-fi comedy hit, and it's 1989 sequel. This modern update has four women starting a New York City ghost-catching business together. It stars Melissa McCarthy, Kristen Wiig, Kate McKinnon and Leslie Jones (as the four leads); and it features Chris Hemsworth, Andy Garcia, Charles Dance, and most of the original movie's cast, in supporting roles. It was directed by Paul Feig (who previously directed McCarthy and Wiig in the hit comedy flick 'BRIDESMAIDS'), and it was written by Feig and Katie Dippold (who also wrote 'THE HEAT'; which was directed by Feig and costarring McCarthy). Ivan Reitman (the original two films' director) returned as a producer of this installment. The movie has received mostly positive reviews from critics, and female fans alike, but it's also taken a lot of sexist backlash from misogynistic moviegoers. It's been a hit at the Box Office as well (so far). I really liked it.

Dr. Erin Gilbert (Wiig) and Dr. Abby Yates (McCarthy) co-wrote a book on the existence of ghosts, many years earlier. Gilbert has since attempted to distance herself from the publication; in order to become a teacher at Columbia University. Yates has continued to study paranormal activity, at a technical college, with her new colleague Jillian Holtzmann (McKinnon). When Gilbert is approached about a possible ghost sighting, she reunites with Yates (in order to investigate it). Gilbert, Yates and Holtzmann later start a 'ghost busting' business together; where they're soon joined by a subway worker named Patty Tolan (Jones).

The movie is without a doubt funny, and also aptly made. Feig is definitely a talented director, and he and Dippold wrote a great script together. The cast is all exceptional as well. While the film is definitely not as memorable as the classic original, it is undoubtedly superior to 'GHOSTBUSTERS II'. I think it has the perfect combination of supernatural thrills, intelligent humor, and nostalgic magic. As far as your average reboots go, it's nearly flawless. The movie is also a very noticeable crowd-pleaser (at least at the theater I saw it at). It's definitely a lot of fun!
at 10:15 PM
Labels: Chris Hemsworth, Ghostbusters, Kristen Wiig, Melissa McCarthy, Reviews, Sony Pictures