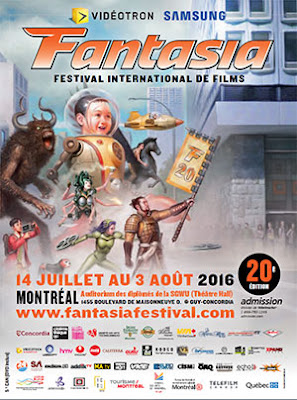 In the past, Film-Arcade.net has covered the Fantasia International Film Festival which runs from July 14th - August 3rd in Montreal, Canada. It's one of the world's best multi-genre film festival in the world where some the latest buzz worthy and major studio genre films have made its premiere. After a hiatus, our coverage on the festival is back. This time, it'll span over two sites as Anthony T's Horror Chamber will also have coverage highlighting some of the obscure/short horror/sci-fi films playing at the festival.

There are three ways you can follows our coverage.

First, you can follow it through the Film-Arcade.net Twitter page at https://www.twitter.com/FilmArcade We'll also be retweeting whatever stories and reviews that happen on Anthony T's Horror Chamber

Third, on the site under Fantasia 16 list on the left hand side.

I hope you enjoy our coverage and thank you for taking your time to visit Film-Arcade.net.

For more information on the film festival itself, you can goto: http://www.fantasiafestival.com/2016/en/
at 10:06 PM
Labels: Fantasia 2016, Fantasia International Film Festival, Site News