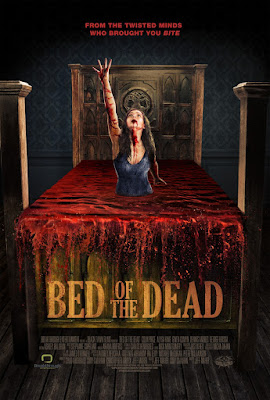 When I was glancing at the films playing at this year’s Fantasia International Film Festival, “Bed of the Dead” stuck out from some of the bunch. The reason it stuck out was its title. With titles like “Dawn of the Dead”, “Shaun of the Dead” and “Night of the Living Dead”, you would think this film would have zombies as the focal point. Nope, there are no zombies here as this is more of the supernatural horror variety. Still, I was very interested in seeing this film because it’s killer trailer and the poster art for this chiller.

The film is about four friends who spend the night at a sex club. When they check into their room, they noticed a nice antique bed in the room. They decide to sleep there and have the time of their lives. Little do they know the bed is haunted by a cursed past. Soon, they get picked off one after another. Now, they must try and find the bed’s secret before their souls become part the bed notorious history.

Going into “Bed of the Dead”, I thought this wouldn’t be a serious horror film given the title and the fact that most of the scenes takes place on a bed. Long and behold, I was very surprised that this was scary and had no punchlines would hurt the film’s serious tone.

Most of that had to do with the very good direction from first time feature director Jeff Maher, who has done cinematography on films such as “Antisocial” and “Bite” which was recently released here in the U.S. Maher does a very good job making sure the images have a horrific feel to them. Whether it’s working with the effecting team to making sure his cinematographer get the shots that make the look work, it makes everything dark and chilling especially in the bedroom scenes. Maher also does a very good job making sure that the acting fits with the story at hand and making sure that acting keeps you interested. That aspect was handled very well especially with the performances as I was interested with the characters throughout.

Speaking of the performances, the two leads Colin Price and Alysa King were very good in this film. They both did a very good job making sure their characters are interesting enough to keep their subplots and characters interesting. It kept me investing with what I was seeing on the screen.

The screenplay from Maher and Cody Calahan (Antisocial) was very good. One of the things that I liked about the screenplay was a brief backstory to the leads and the bed. You get a glimpse into the characters during the course of the film and how it develops towards the end. It made the characters interesting. It’s something that you want in a story as it adds depth to them and make them interesting. When a horror film can do that, you know that you’re glued to what’s happening. The other thing that I like about this was the fact that there was a sense of dread throughout. The writers do a very good job making sure that it has that feeling as it allows to make the action feel scary. There was a couple a scenes where the creativity in the death scenes helped make it horrifying to watch. When that happen, I know that I’m having a good time.

This is up there with the likes of “The Witch” and “10 Cloverfield Lane” as one of the best horror films that I’ve seen this year. “Bed of the Dead” is a chilling and gory film that makes you fear the mattress that you’re sleeping on.