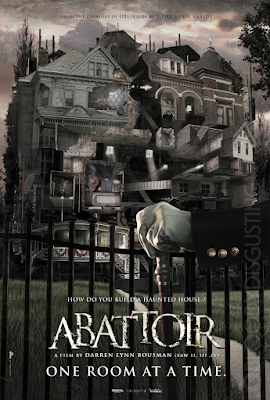 The film will be screening on July 25th at the Concordia Hall Theatre in Montreal, QC.

“How do you build a haunted house?” The job of real-estate reporter Julia Talben (90210’s Jessica Lowndes) is set on a hellish new path when her family is savagely murdered. In freakishly short time, the house — the crime scene — has gone up for sale, and when Julia goes by for a final look, she’s horrified to discover that the entire “murder room” where her family was slaughtered has been torn out of the building. Using the investigatory tools of her trade, she discovers that this has been happening a number of times — random killings, home purchased, kill room torn out of the structure. The common thread? A mysterious buyer by the name of Jebediah Crone (SON OF ANARCHY’s Dayton Callie).