"Chronicles of the Ghostly Tribe" Review by Tim Hellman 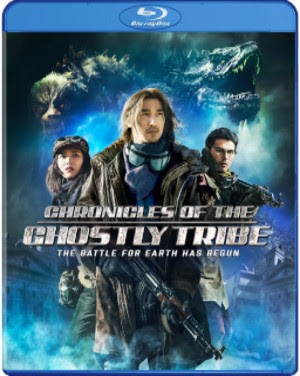 CHRONICLES OF THE GHOSTLY TRIBE': Three and a Half Stars (Out of Five)

A Chinese fantasy action flick; about researchers, that discover ancient creatures, in the mountains near the Mongolian Border (in 1979). The story also takes place in modern day New York City (when the monsters reappear). The movie was directed by Chuan Lu, who also co-wrote the script (with Bobby and Nick Roth). It stars Mark Chao, Yao Chen, Rhydian Vaughan and Wang Qingxiang. The film is cheesy, and sometimes hard to follow, but it's still a lot of fun (especially if you like creature features).

The story begins at the 1979 Mongolian Border; where the fossils of monstrous creatures have been found. A research team has been assigned to head into the mountains, to investigate the findings. They're lead by a professor (Qingxiang), his daughter (Chen) and an adventurer, named Hu Bayi (Chao). After the team is attacked, by various different beasts, Bayi is the only survivor. The film then flashes forward, to present day New York City, where Bayi now works as a librarian (studying demonology). He's called back into action, when he hears about more monster attacks (in Northern China).

The film has some fantastic visual effects (the creatures look amazing)! I had trouble keeping up with the subtitles sometimes, and also the story, but I still really enjoyed the movie. I love monster flicks, and this one is definitely a fun one. I couldn't have cared less about the human characters, or any of their drama, but I loved watching the creatures; and the amazing special effects!
at 6:32 PM
Labels: Chronicles of the Ghostly Tribe, Reviews, Well Go USA