"Back to the Future" Documentary "Back in Time" Races to DVD 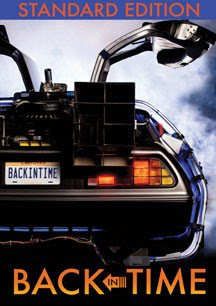 FilmRise and MVD Distribution recently send us over information for the upcoming DVD release "Back in Time". The film takes a look at the "Back to the Future" film while also looking at its culture impact. The film features interviews from  Steven Spielberg, Robert Zemeckis, Bob Gale, James Tolkan, Lea Thompson, Christopher Lloyd and Michael J. Fox.

"Back in Time" hits retail on September 13th.

This documentary is a look at the very real impact the Back to the Future movies have had on our culture. This tightly-focused film shows that what was once a little idea became something truly amazing which resonated through the culture.

Spanning over two years of filming, Back in Time is a cinematic monument to the immensity of the trilogy's fandom. By capturing countless of hours of footage and interviews, the crew watched as the impact of the trilogy became apparent. Steven Spielberg, Robert Zemeckis, Bob Gale, James Tolkan, Lea Thompson, Christopher Lloyd and Michael J. Fox all give must-see interviews about their experiences with the movie.

Back in Time began as a project conceived by Jason Aron, a fan of the Back to the Future series, that was posted to the crowdfunding website Kickstarter in June 2013. Over 600 people backed the campaign, pledging over $45,000 in order for the documentary to be made The film was shot over a period of two years; while production primarily took place in the United States, another filming location was that of London, England during a Back to the Future fan event. The film opened theatrically on October 21st 2015, the day that the series' protagonist Marty McFly travels to in Back to the Future Part II.

Gregory Weinkauf of The Huffington Post said that the documentary "gets to the heart of the Back to the Future phenomenon, proving as enjoyable as the franchise it affectionately explores", calling it "a delightful return to, and updating of, a beloved story".

Reviewer Logan J. Fowler of the website Pop-Break noted that it was "a well crafted and awesome look back at the movie that changed so many lives in the past, and will continue to do so in the future."

The DVD can be ordered now at the MVD Shop or on Amazon. Hi Res Cover Art: http://mvdb2b.com/i/300dpi/MVD8722D.jpg
at 9:45 AM
Labels: Back in Time, Filmrise, MVD Entertainment