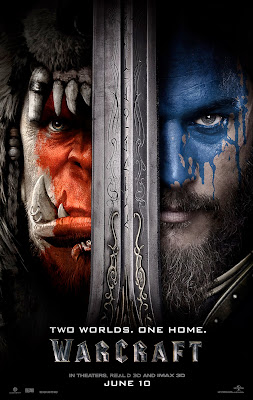 'WARCRAFT: THE BEGINNING': Four Stars (Out of Five)

Fantasy-action flick; based on the immensely popular video game franchise, and novel series (of the same name). This movie tells the origin story, of how an army of orcs invaded the world of Azeroth; to take it for their own. It was directed by Duncan Jones (who also helmed such other popular sci-fi flicks, as 'MOON' and 'SOURCE CODE'); it was also written by Jones and Charles Leavitt (based on a story, and characters, created by Chris Metzen). The film stars Travis Fimmel, Paula Patton, Toby Kebbell, Ben Foster, Dominic Cooper, Daniel Wu and Ben Schnetzer. It's gotten mostly negative reviews from critics, but it's also been a hugely profitable blockbuster overseas (breaking many records, all around the world). I really wanted to like this movie, and I did love it's visuals, but the story and characters are a little disappointing.

The film tells the story of a world of orcs, called Draenor, that's quickly dying. They've discovered a portal, using a powerful magic force called the fel, that will lead them to another world (known as Azeroth). The army of orcs, known as the Horde, is lead by a sinister orc, named Gul'dan (Wu); who uses the fel to drain the life force of other species (in order to fuel the portal). One noble orc chieftan, named Durotan (Kebbell), doesn't want to enslave the people of Azeroth (for this purpose). So Durotan, and a half-breed (orc-human) named Garona (Patton), attempt to form an alliance with the humans there. The humans are lead by a king, named Llane (Cooper), and a knight, named Lothar (Fimmel).

I've never played the game, or read any of the books (or comics), so I didn't have any real high expectations for this movie. I did love the trailer though, because of it's visuals; and I have to say, the special effects (in this movie) are some of the best I've ever seen. I also love epic sc-fi fantasy flicks, like this. I'm just disappointed that the story, and characters, don't live up to the film's spectacular visuals. Duncan Jones is a very talented director; but his wife did get cancer during the production of this movie (and his father, David Bowie, died of it). Still, I think he delivered. I think the movie's main problems are due to it's script (which Jones did help write though). I think it was probably too faithful to the video game series, and novels. The story might have worked really well in those formats, but translating it to other art forms (like film) doesn't always work. I hope the sequels are much better (I did absolutely love this movie's visuals though). I probably would have liked the film much more, when I was a kid.
at 6:50 PM
Labels: Ben Foster, Duncan Jones, Reviews, Universal Pictures, Warcraft