"The Conjuring 2" Review by Tim Hellman 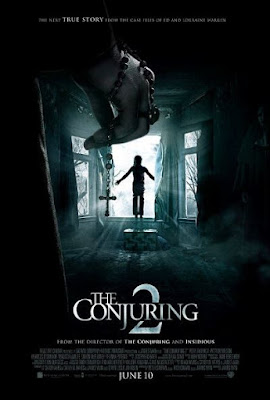 'THE CONJURING 2': Four and a Half Stars (Out of Five)

Sequel to the 2013 blockbuster supernatural 'fright flick', once again directed by James Wan (who also helmed the original 'SAW', 'INSIDIOUS'1 & 2 and 'FURIOUS 7'). It was written by Carey and Chad Hayes (who also wrote the original film), as well as Wan and David Leslie Johnson. Vera Farmiga and Patrick Wilson reprise the leading roles, as paranormal investigators Lorraine and Ed Warren. This time they're investigating an aggressive poltergeist, that's haunting a London family (in 1977). The script is once again (said to be) based on a true story. The film also costars Frances O'Connor, Madison Wolfe, Franka Potente and Simon McBurney. It's received good reviews from critics (once again), and it's also another hit at the Box Office (the first movie made over $300 million, on a $20 million budget). I found it to be a more than decent follow-up.

The movie begins with Ed and Lorraine Warren (Wilson and Farmiga) investigating the Amityville murders (in 1974), to see if a demonic presence was really responsible for the horrendous slayings. While experiencing a vision of the crimes, Lorraine foresees Ed's murder (by a tragic impaling). The story then flashes forward 3 years, to London; where a single mother (O'Connor), and her four children, are being terrorized by a supernatural presence. Ed and Lorraine are called to investigate the haunting, but Lorraine is extremely concerned about Ed's safety.

The movie is once again outstandingly crafted, by Wan. It's got great atmosphere, it's disturbingly creepy, and the 'jump scares' are really well done. The story is (once again) intriguing, scary and filled with good character development. It's a little slow-paced, at first, but the film makes up for it in the second half. There's not really much to complain about, but (still) I didn't find it quite as memorable as the original movie.
at 6:48 PM
Labels: James Wan, Patrick Wilson, Reviews, The Conjuring 2, Vera Farmiga, Warner Brothers