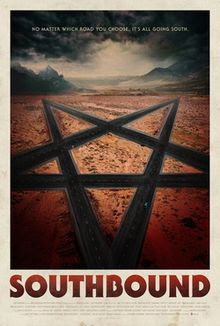 'SOUTHBOUND': Four and a Half Stars (Out of Five)

An anthology horror flick, involving five interlocking stories; about a deadly stretch of desert highway, that brings travelers face to face with their worst nightmares. The film was directed by Radio Silence, Roxanne Benjamin, David Bruckner and Patrick Horvath; three of the four filmmakers also previously worked together on another horror anthology thriller, called 'V/H/S'. It was written by Benjamin, Bruckner, Horvath, Susan Burke, Dallas Hallam and Matt Bettinelli-Olpin (who also costars in the movie). The film was impressively made on a very low-budget, stars a cast of mostly unknowns, and surprisingly got rave reviews from most critics. I loved it as well.

The movie's five chapters are titled 'The Way Out', 'Siren', 'The Accident', 'Jailbreak' and 'The Way In'. Each one deals with different people, traveling down the same stretch of highway. They must all confront different demons, and their worst fears (about themselves). One story involves two men trying to escape floating demons (that are relentlessly chasing them), another tells the tale of a female rock band (that breaks down on the deadly highway), another story deals with a man that hits a girl with his car, another one tells the tale of a brother trying to rescue his sister (he believes is being held captive there) and the final story deals with a family attacked by three masked strangers. All the segments appear to deal with purgatory, and Hell, and they all interlock.

I'm a big horror movie fan; especially indie horror flicks, and especially horror anthology films. So I really like this movie. It's really well written, directed and acted. The film reminds me of similar type genre films, that I grew up on (as a kid); or similar TV shows (like 'THE TWILIGHT ZONE' and 'TALES FROM THE CRYPT'). This film rivals the 'V/H/S' franchise, in quality (which I'm a big fan of as well), so it didn't surprise me that most of the filmmakers worked on the first one (and some more than that). What I most love about this movie though, is that it reminds me of a real nightmare. Everything is so creepy, weird and bizarre; and nothing seems to make any sense (but it actually does). I have to give any film credit, that can capture that dream like quality so believably. I really like this movie!
at 10:15 PM
Labels: Reviews, Sony Pictures Home Entertainment, Southbound