"Raiders!: The Story of the Greatest Fan Film Ever Made" Review by Tim Hellman 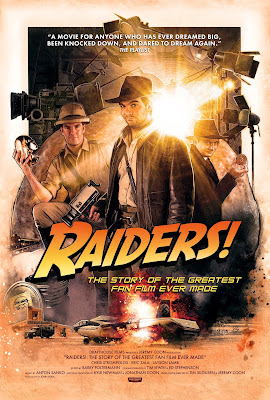 'RAIDERS!: THE STORY OF THE GREATEST FAN FILM EVER MADE': Four Stars (Out of Five)

A documentary on the making of the fan film 'RAIDERS OF THE LOST ARK: THE ADAPTATION'; which is a shot-for-shot remake of the classic 1981 Steven Spielberg movie. It was made by two 11-year-old Mississippi boys, and their friends, over the course of 7-years. They finished the entire remake, except for the final airplane battle sequence. The friends reunited, 30-years later, to finally film that one missing scene (and finish their movie). This film documents that process. It was directed and written by first time filmmakers Jeremy Coon and Tim Skousen; and it was based on the book by Alan Eisenstock. Being a past childhood filmmaker, myself, and a huge movie nerd, as well (to this day), I really enjoyed this documentary.

Two 11-year-old childhood friends, Eric Zala and Chris Strompolos, setout to remake their favorite movie, 'RAIDERS OF THE LOST ARK', in Mississippi in 1981. The film was not available on video yet; so they had to rely on a lot of other resources to pull it off (like a published script, and magazine articles), as well as their friends and memories. They completed filming every scene of the original movie, over the next 7-years, except for the landing pad battle sequence. 30-years later, the friends finally reunited; and raised the money they needed (through a Kickstarter campaign) to finish their childhood dream.

I've never seen the fan film, this movie is about, but I have (of course) seen Spielberg's 1981 masterpiece (multiple times). I love the original film still, and I'm sure I'd probably like the kids' remake too. Spielberg has seen it (and he loves it), so have many others; like filmmaker Eli Roth and film critic Harry Knowles (who both appear in this documentary). Even though I haven't yet seen the beloved fan flick 'cult classic' (this is based on), I could still really appreciate this documentary; because it beautifully captures what a 'love for movies' is all about. I was a childhood filmmaker, and I still try to make movies (today); so I definitely found this film inspiring and relatable (to say the least).
at 6:48 PM
Labels: Documentary, Drafthouse Films, Raiders!: The Story of the Greatest Fan Film Ever Made, Reviews