"It's So Easy and Other Lies" Review by Tim Hellman 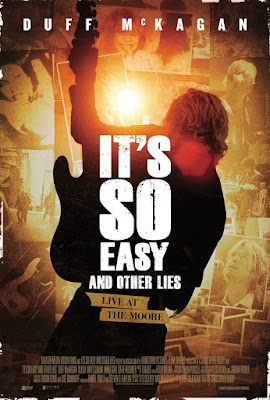 'IT'S SO EASY AND OTHER LIES': Two and a Half Stars (Out of Five)

A documentary about the life of popular musician Duff McKagan. McKagan is most well known as the former bass player for the rock bands Guns N' Roses and Velvet Revolver. This film details his music career, and personal life; including a long battle with drugs and alcohol abuse (which nearly killed him). It's based on McKagan's own best-selling New York Times' memoir, and it was directed and co-written by Christopher Duddy (a veteran camera operator). The movie is informative, and somewhat inspirational, but it's also nothing too memorable (or entertaining).

McKagan started out playing with multiple Seattle punk bands (in the early 80s). Then, in 1983, he met rock musicians Slash and Steven Adler; by answering their newspaper add (seeking a bass player), in Los Angeles, California. The trio formed a rock group called Road Crew, before disbanding and joining Guns N' Roses (in 1985). His fame and fortune led to lots of consistent, and very addictive, drugs and alcohol abuse (although he was introduced to the harmful substances as a kid). It almost killed him, but he fought back. The movie tells this story, through several interviews and archive footage.

I think I would have liked this film, a lot more, if I was a fan of Guns N' Roses (or Velvet Revolver). I like some of their music (definitely), but I wouldn't call myself a fan. I do love punk music though, so that part of the movie was entertaining to me. I've also had some problems with excessive alcohol consumption, so that part of the film was interesting to me (and kind of inspiring). The flick is mostly uninvolving though (for me at least), and a bore.
at 11:30 AM
Labels: Documentary, It's So Easy and Other Lies, Reviews, Rock Documentary, XLrator Media