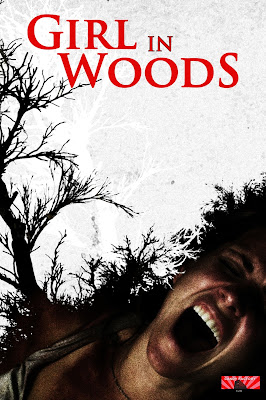 Sometimes when reviewing a film for either of my sites, I’ll go into a film where I haven’t seen a trailer. It gives me a chance to go into something without having an opinion on it. When “Girl in Woods” came across my way, I was interested because I like horror films and I like some of the main cast involved including Juliet Reeves (“Automaton Transfusion”, “Zombies, Zombies, Zombies!”), Charisma Carpenter ("Buffy the Vampire Slayer", "Angel", “The Expendables”).

The film is about a woman (Juliet Reeves) who’s struggling with the death of her fiancé (Jeremy London) while stranded in the mountain wilderness trying to survive. She begin to have a tough time dealing with the elements as her state of mind starts to crack as she starts to go insane. To make matters worse, she begins to notice that something dark is following her every move. This leads her to find something about herself that she hasn’t noticed in a long time. Will it help her find a way out of the woods or lead down a road of horror beyond what she’s seen before. “Girl in Woods” also co-stars Charisma Carpenter and Lee Perkins.

Sometimes films can surprise you in a good or bad way. Going into “Girl in Woods”, I thought that this would at least an entertaining film because it had the feel that it was my type of film from the first half hour. But after watching it, I was surprised that this was more than a psychological horror film, as this had a couple of good scary moments and a great lead performance.

First off, this film had very good direction from writer/director Jeremy Benson. One of things that makes his direction work for me was the way that he directs the action and the wilderness scenes. The scenes were handled in a way that it helps keep your interest with the story at hand while providing some tense moments. This film has a lot of scenes in that wilderness where there was little or no dialogue. What Benson does well is to use that atmosphere to his advantage. It helped create a sense of dread that helps the film move along. The other thing that I liked was the fact that he does a great job directing his cast. Whether it’s the hallucination flashbacks to making sure Reeves’ performances fit the main character’s state of mind, everything is done in a way that this element works so well with the rest of the film.

Speaking of Juliet Reeves’ performance, it was very good and helped this film be what it is. She does a great job taking on this complex role as she has to play three versions of her character. By making each version work, it kept my attention and making her character an interesting one to watch. If one of those characters of aspects of her character didn’t work, it would’ve taken away some of the psychological aspects in which this film is going for.

The screenplay written by Benson was an interesting but good one. What he does very well, he manages to do a good job focusing on the main character’s state of mind. Whether it’s the way that he focuses on the psychological problems to her dark past, everything is done in a way that makes the character interesting. It made everything that went on in the film work so well that I was l kept interested in the story. The other thing that it does is provide some horrifying moments. Benson does a good job making sure that those scenes fit the context in the story so that it has a purpose. It also helped keep the story moving, as it doesn’t become boring or dull to watch.

This is definitely a film that you should check if you’re into psychological horror as it’s one of the more effective ones that I’ve seen in a while. With Juliet Reeves’s performance and Jeremy Benson’s direction, “Girl in Woods” is a terrifying psychological horror film that will make you afraid of the woods.