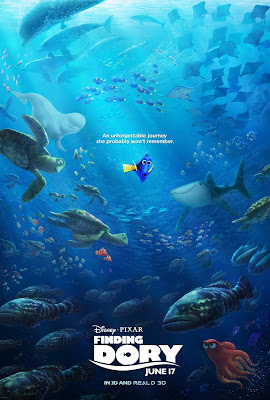 'FINDING DORY': Three and a Half Stars (Out of Five)

The sequel to the blockbuster Pixar hit 'FINDING NEMO'. It once again stars the voice talents of Ellen DeGeneres and Albert Brooks. It was directed by Andrew Stanton and Angus MacLane; and it was written by Stanton, Bob Peterson and Victoria Strouse (Stanton also co-directed and co-wrote the original movie). The story, this time, revolves around the amnesiac Dory, as she goes on a quest to find her parents. I don't think it's as good a film as the original; or nearly as great as the best of Pixar.

The film picks up shortly after the events of the original movie. Nemo (Hayden Rolence) is now safely, and happily, living with his father, Marlin (Brooks). Dory (DeGeneres) still lives with them as well, but she also still longs to reunite with her parents. After a sudden flashback, Dory decides to go on a quest to find them. Nemo and Marlin go with her.

I think it's a little odd for the filmmakers to have made a sequel, to 'FINDING NEMO', that has such a little amount of Nemo in it. He's also voiced by a different actor (due to the fact that the original actor matured so much). Dory is an interesting, and entertaining, character though; and DeGeneres is the biggest star, of the original movie, to market the film as your lead with. So I understand Disney's (and Pixar's) financial motives. Even with these doubts, I still had high hopes. I was sadly disappointed. It is still a visually stunning, and funny, film though. But the story (and adventure of it) didn't intrigue me that much. I also was expecting a lot more heart.
at 3:37 PM
Labels: Finding Dory, Reviews, Walt Disney Pictures