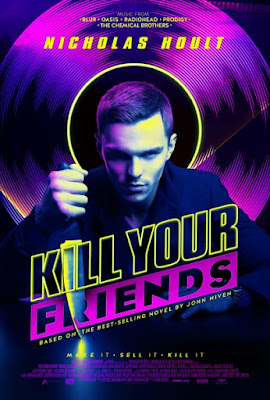 Welcome to the first edition of Dueling Opinions. This will be a monthly column where Anthony T and Tim Hellman will be reviewing a film and offering our thoughts on a film or what ever else we have on our minds. This month we'll be reviewing "Kill Your Friends" starring Nicholas Hoult. The film is about a drug addicted A&R representive (Nicholas Hoult) who’s looking to get ahead at this record company. When he is turned down for a promotion, he begins to realize that the only way to get ahead is to elimate the people in his way between him and a promotion. This leads him down a dark road of blackmail, drug fueled rage and murder. Will this end with him on top or will his life come crashing down. James Corden also co-stars in this film.

A very dark British thriller-comedy flick; about an extremely desperate A&R man, who will do anything to find the next big hit. The movie stars Nicholas Hoult, in the lead role; and it costars James Corden, Georgia King, Dustin Demri-Burns, Craig Roberts, Tom Riley, Joseph Mawle, Jim Piddock and Ed Skrein. It was directed by first time feature filmmaker Owen Harris, and it was written by John Niven. The film was based on Niven's 2008 novel (of the same name). It's the type of movie that left me feeling completely disgusted, when it was over (by nearly everything I just witnessed in the film), and I respect it for that.

The story takes place in 1997 London; when British pop music was at it's popularity peak. The film cleverly illustrates how no one in the industry really knew what they were doing; but instead everything was left up to the ever-changing taste of the consumer. Hoult plays Steven Stelfox; a 27-year-old A&R man, who's desperately trying to make it big in his business. So desperate, he might even kill!

The movie is really dark, and sometimes hard to watch. It's hard to watch, and yet I couldn't look away! I was planning to turn the movie off, halfway through (to get some sleep), but I couldn't rest until it was over. To me, that's a really good movie. I hated everything I was seeing, and despised all of the characters in it, but it was still really involving and fascinating. It's also funny, very darkly funny, but above all it's memorable. Hoult is great in the lead (it's his best performance to date) and I think Harris is a filmmaker to watch for.

When I started watching “Kill Your Friends”, I started to get that “American Psycho" vibe. That helped get my interest almost immediately, as I liked that film a lot. What I didn’t expect was that this would be one of my favorites of this year so far. I really liked this film a lot, as its one of those hidden gems from Britain.

Most of the reason why this is very good was the way director Owen Harris approaches this material. He makes sure that the style of the film had the type of feel that kept you engaged with the main character through the film. It made me very interested with what was going on. Also, I liked the way Harris uses the music. He makes sure that the music fits the tone and its time period. It helped gave the film’s its engaging feel. Both of these components have an “American Psycho” vibe to it even though there’s a few scenes of bloody violence. Harris also does a very good job making sure that he gets the performances that he needs to makes this film work as they were very good. There was great chemistry between the cast as it made their characters interesting which helped it be very entertaining. The film has an excellent performance from the film’s lead Nicholas Hoult. I liked how he made sure that this character had a Patrick Bateman (lead character from “American Psycho”) charismatic feel. It made his portray of his character very good and it was a lead character that grabs your attention. When that happens with a film like this, it usually come out as gold.

The screenplay written by John Niven (who also wrote the novel which the film is based on) was very good. One of the things that I liked about it was the fact that he does a great job making sure the main character is the center of attention. Whether it was the way that he handles the narration to how he makes sure the main character is the main focus, everything works to perfection as I was into the character and wondering how the story was going to turn out. The other thing that Niven’s does well is to make sure he develops the main character during the course of the film. It was nice to see how the screenplay follows the lead character’s decent into murder and his climb up in the company while not doing too much bloody scenes or getting off track. It allows more focus on the character and doesn’t feel like a complete “American Psycho” rip off.

Going into this, I thought this would be “American Psycho” 2016, but this in a way is and isn’t. This is what makes this great. With its great performance by Nicholas Hoult and a killer directing, “Kill Your Friends” is a must see.