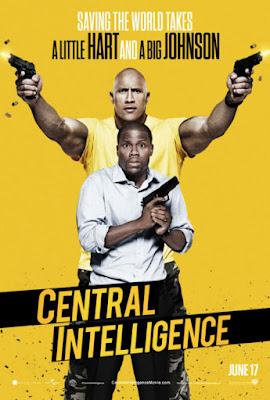 An action-comedy buddy flick, starring Dwayne Johnson and Kevin Hart. It was directed by Rawson Marshall Thurber (who also previously helmed other hit comedy flicks, like 'WE'RE THE MILLERS' and 'DODGEBALL'). It was written by Thurber, David Stassen and Ike Barinholtz. The film costars Amy Ryan, Danielle Nicolet and Aaron Paul. It's a pretty funny movie, because of the pairing of Johnson and Hart, and it's also surprisingly touching (at times).

Johnson plays Bob Stone; a once bullied (and severely overweight) nerd, that's now a lethal CIA agent. Calvin Joyner (Hart) went to high school with Stone; he was really popular, and helped Bob out during a traumatizing incident. So Bob has idolized Calvin ever since. The two meet for drinks, the weekend of their high school reunion, and Calvin gets pulled into a life threatening CIA adventure.

Johnson and Hart have beautiful chemistry together; it really is a classic odd couple pairing! That's the highlight of the movie, but it also has a lot of heart; and a strong message about bullying. It's definitely 'forced' and 'clichéd', but it's also (surprisingly) emotional. I really enjoyed the movie, for that reason as well. The plot, and action scenes, are routine (and forgettable), but the character development is awesome! It's probably the best Kevin Hart vehicle yet!
at 3:37 PM
Labels: Aaron Paul, Central Intelligence, Dwayne Johnson, Kevin Hart, Reviews, Warner Brothers