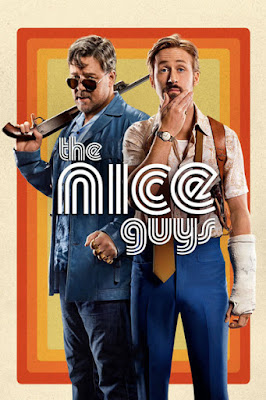 'THE NICE GUYS': Four and a Half Stars (Out of Five)

Gosling plays Holland March; a private detective, in 1970's Los Angeles, and single father. He's good at his job, but he also takes advantage of people; and he's also a bumbling alcoholic (due to the fact that his wife recently passed away). His daughter, Holly (Rice), takes care of him, more than he looks out for her. Crowe plays an enforcer named Jack Healey. Healey is also very good at his job, but he's also only motivated monetarily. March and Healey's paths cross, when they're both involved in the same missing girl case. They reluctantly team up, in order to solve it.

The movie is hilarious; due to some really cleverly written dialogue, and some insanely odd comic scenarios. It's also a great action flick; with some highly entertaining, and extremely well-executed, action scenes. The characters are really well written, and acted, and there's even some really touching drama (involving them). The movie exceeds on all fronts, and there's never a dull moment. Besides all that, it's just a great, nostalgic throwback; to the buddy flicks of yesteryear (which Black was a master of). The film is a must see!
at 7:50 PM
Labels: Kim Basinger, Reviews, Russel Crowe, Ryan Gosling, Shane Black, The Nice Guys, Warner Brothers