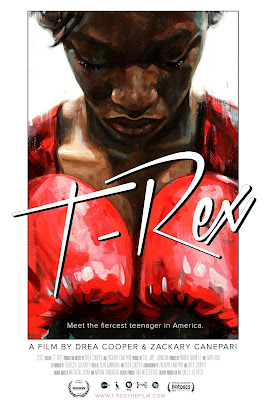 ZCDC and The Film Collaborative recently send us information about their upcoming release "T-Rex". The documentary focuses on American Olympian Claressa "T-Rex" Shields. The film has been winning awards all over the world on the festival circuit.

"T-Rex has begun a nationwide rollout and will open June 24 in New York City for a week run at the Made in NY Media Center by IFP.

ZCDC and The Film Collaborative are honored to announce the long-awaited theatrical release of the award-winning documentary T-Rex. The inspirational true story of American Olympian Claressa "T-Rex" Shields, T-Rex has begun a nationwide rollout and will open June 24 in New York City for a week run at the Made in NY Media Center by IFP.

Since its world premiere at SXSW, T-Rex has thrilled critics and audiences alike, picking up awards for Best Documentary and Best Feature around the world. The first feature length portrait by directors Zackary Canepari and Drea Cooper and producer Sue Jaye Johnson, T-Rex is an intimate look at the young woman behind the story that made a nation proud and gave hope to young people everywhere. The poignant result has screened at over three dozen festivals worldwide. Shields will return to the Olympic boxing ring this summer at the Rio de Janeiro Games.

T-Rex is an intimate coming-of-age story about a new kind of American heroine. For the first time, Women's Boxing is included in the 2012 Olympics. Fighting for the gold from the U.S. is Claressa "T-Rex" Shields, the youngest competitor at just 17 years old. From the hard knock streets of Flint, Michigan, Claressa is undefeated and utterly confident. Her fierceness extends beyond the ring. She protects her family at any cost, even when their instability and addictions threaten to derail her dream.

The one stabilizing force in her life, coach Jason Crutchfield, has trained her since she was just a scrawny 11-year-old hanging out at his gym. Jason always wanted a champion, he just never thought it'd be a girl. Her relationships with her coach and her family grow tense as she gets closer to her dream. Claressa desperately wants to take her family to a better, safer place and winning a gold medal could be her only chance.