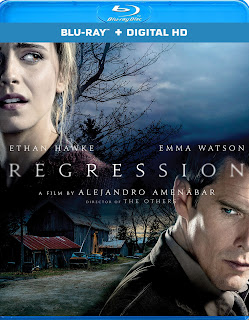 You would think a film starring Ethan Hawke and Emma Watson would appear on your radar screen when looking at upcoming theatrical films. This wasn’t the case with their latest film “Regression”, as the first time I heard about it was when I did a news story about the film’s upcoming home video release. It got me thinking that this looked like one of those films where it must have been shelved or is bad enough that it was released quietly release in limited release. Still, I wanted to that chance and see this.

The film takes place in 1990 where a detective (Ethan Hawke) is investigating a horrific crime when a young woman (Emma Watson) thinks that her father John is involved. Soon, her father admits that without recollection that he committed that crime. A psychologist is brought in to help John as he tries re-piece the moments his mind and find out what truly happens. This unveils what truly happened. The film also co-stars David Dencik and David Thewlis.

No wonder why this never made it into many theaters in the first place. That was my first thought after watching “Regression”. It was very surprising that this was very bad because this had a good cast on paper and the fact that I really liked Alejandro Amenabar’s “The Others”. Sadly, this was a film where I felt bored from start to finish as nothing works.

Most of the reason why I didn’t like this film was Amenabar’s direction. One of the things that I didn’t like about it was the fact that nothing grabbed my attention. Whether it was the way the scenes were approached to how he approaches the action, everything was just flat out dull and not engaging. When that happens, you lose interest in a film like I did with this film. The other thing that Amenabar doesn’t do right was the way that he handles the performances. It felt the same as the directing. You would think the performance aspect would be decent with Ethan Hawke and Emma Watson in this, but it wasn’t the case as they didn’t look like they were interested in the material. Their performances felt more phoned in, as they didn’t bring anything to their characters that. It’s the bad directing and screenplay that made it all possible.

Speaking of the screenplay, it was very bad from start to finish. One of the things that I didn’t like was the way Amenabar writes some of the film’s scenes. It felt like there was nothing in them to make me interested with what was happening in the story. Some of the scenes felt like it came out of something that you would see in a Lifetime film as it felt dull and lifeless at times. The other thing that makes this bad was the fact the character and story development either wasn’t there as it felt rushed and not important. It would’ve been nice to slow down and develop everything. This would’ve made the story a little more interesting. Instead, I’m not given a reason to care about the characters or the action that takes place.

This is easily one of the worst films that I’ve seen so far this year as there is nothing good about this. From its weak direction to an unenergetic screenplay, “Regression” is a film that should’ve stayed on the studio shelves.