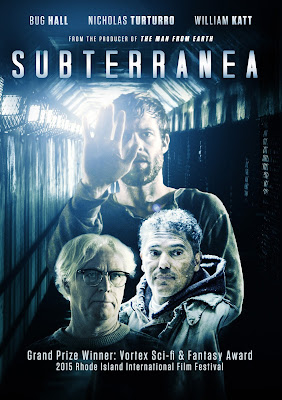 The deal was negotiated by Ed Seaman from MVD and co-producers Mathew Miller and Brandon Woodard on behalf of Birdman Films.

Subterranea stars Bug Hall as "The Captive", who was locked in a dark cell as a small child and was raised in complete isolation, never seeing daylight or even another human being. Over twenty years later, without warning, he is released into society with nothing but the clothes on his back. Determined to find out who he is, The Captive discovers that he's the centerpiece of a dangerous orchestrated sociological experiment and sets off to find the truth about his shadowed existence, ultimately leading to a thrilling confrontation with his maker, "The Provider" (William Katt).

Following the release of IQ's double album "Subterranea", writer / director Mathew Miller was inspired. "As a huge fan of IQ, I was honored and thrilled to be collaborating with Peter Nicholls (IQ lyricist, writer and lead vocalist) and the band. My goal was to respect the original material and bring to life the already stimulating and poignant images the music has created in all of our minds and hearts as fans."

As the film was in development, Mat struck a professional friendship with one of the producers from The Man From Earth, Eric D. Wilkinson. Wilkinson's debut film has achieved "cult status" (The Man From Earth now resides among the Top 50 Science Fiction Films of all time on the IMDb) and was confident that he could help bring this film to a wider audience.

"When I first read Mat's script, I fell in love with the story and characters," said Wilkinson. "In some ways, the film reminded me of The Man From Earth. It had that 'intellectual sci-fi feel' to it, and at the same time, really played well as a conventional thriller. Mathew is a super talented young director and I was committed to helping him realize his vision for the material. MVD is a great company that is exceptionally supportive of filmmakers and producers and I look forward to our film's release later this year."