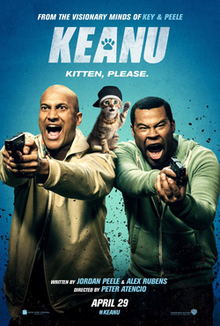 'KEANU': Four and a Half Stars (Out of Five)

Action-comedy flick, starring Jordan Peele and Keegan-Michael Key; who also paired together on the TV shows 'KEY AND PEELE' (which they created) and 'MAD TV'. The duo also co-produced the film, and Peele also co-wrote it; with Alex Rubens (who was also a regular writer of 'KEY AND PEELE'). Peter Atencio directed the movie (he was also the regular director of 'KEY AND PEELE'). The film also costars Tiffany Haddish, Method Man, Nia Long, Will Forte, Luis Guzman and Keanu Reeves (as the voice of Keanu). The movie tells the story of two cousins, trying to rescue a kitten, that was found on one cousin's doorstep, from the drug dealers that stole it. The film is funny, and Keanu (the title kitten character) is adorable!

Rell (Peele) has just been dumped by his girlfriend, and is taking it very badly. So when an extremely cute kitten mysteriously shows up on his doorstep, he feels happy again. He names it Keanu, and starts doing creative photography projects with it. Then one night, while Rell is seeing a movie with his cousin Clarence (Key), Keanu is stolen by gang members; which broke into his house mistaking it for his drug dealing neighbor's (Forte). Rell then convinces Clarence to go on a crazy mission to get the cat back.

Being a cat lover, I absolutely loved this movie! My cat Keno (who was my best friend in the whole world), passed away recently; so this film really brought back special feelings for me. I also really like the movie's crazy storyline, clever dialogue, and absurd comedic situations. I was already a fan of Keegan-Michael Key's, from seeing him in other films and comedy skits (like the one alongside President Obama), but I was unfamiliar with Jordan Peele (having never seen 'KEY AND PEELE' before). They make a great comedy team, and they're both hilarious in this film. The supporting cast is all good as well, and the seven tabby cats (that played Keanu) are amazing!
at 7:28 PM
Labels: Keanu, Reviews, Warner Brothers