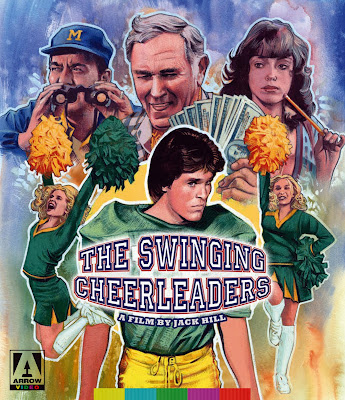 They gave it all for their team...

Jack Hill spent the seventies specialising in tough female characters. He made movies about girl gangs (Switchblade Sisters) and women in prison (The Big Doll House, The Big Bird Cage), turned Pam Grier a star with Coffy and Foxy Brown, and contributed to the Cheerleaders line of drive-in favourites with The Swinging Cheerleaders.

Kate, an undergraduate at Mesa University, goes undercover as a cheerleader for her college newspaper in order to expose 'female exploitation in contemporary society'. But instead of oppression she finds love, friendship and a bigger fish to fry: corruption in the football team, headed up by the coach and his pals.

A favorite of Quentin Tarantino, who screened it at the very first Tarantino Film Fest, The Swinging Cheerleaders features a cast of cult favourites including Colleen Camp (Wayne's World, Game of Death), Rainbeaux Smith (Caged Heat, The Incredible Melting Man) and future Playmate of the Month Rosanne Katon.
at 10:33 AM
Labels: Arrow Video, DVD/Blu-Ray News, The Swinging Cheerleaders