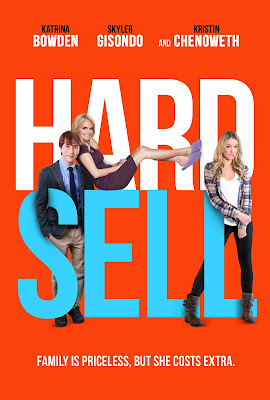 When I first heard about “Hard Sell”, I didn’t know what to think about it. It didn’t look like the type of film that I would be interested in seeing at all as it looked like one of those comedy dramas that doesn’t grab your attention. But when I saw the film’s trailer and realize that Kristin Chenoweth (Pushing Daisies) and Katrina Bowden (Tucker and Dale vs. Evil) were in the film, it made me interested enough to see what this film is about and check it out.

The film is about a senior (Syler Gisondo) who is at a private school in Long Island. He struggles to make ends meet as he lives with a mother (Kristen Chenoweth) who is unstable. Looking to make money quickly, he comes across a beautiful runaway (Katrina Bowen) who helps him plan to make money from the school students. What happens is their plan takes an unexpected turn taking them into the lifestyle of the rich and unstable in this comedy drama.

There are some films that you tend to see where you have the feeling to like a film but can’t for obvious reasons. That was the type of thinking that I had after seeing “Hard Sell”. I thought, the performances were very good and the humor was funny but the screenplay had some problems that were almost big enough to sink this film down.

Let me start off with what I liked about the film. First, the direction was very good. Writer/director Sean Nalaboff does a very good job trying to make his lukewarm screenplay work through his direction. He does a good job making sure that the flow of the film moves at a good pace. It works especially with the performance aspects. Nalaboff makes sure that his cast had good chemistry with each other as it helped make the performances work. Speaking of the performances, Syler Gisonso and Katrina Bowen were very good here especially in the scenes they were together in. Gisonso and Bowen make sure that they’re invested in the material and made their characters engaging enough to try and salvage this film. The chemistry between the two actors were very good as it made this film better than it should have been as they were the two best things about this film.

The other thing that makes it good was the way that Nalaboff inserts humor into the screenplay. The problem with comedy drama sometimes is the timing. You want get most impact out of those dramatic scene while not having the humor ruin it. I never got sense here, as he does a good job timing those scenes very well that makes the humor funny while making dramatic scenes work with the story at hand.

There was one thing that I didn’t like and it’s a big one. It was the beginning of the film. This is a minor spoiler. I didn’t like the fact that the beginning felt like I was entering a film twenty minutes in. Nalaboff should’ve started this focusing in on Bowen’s character and how she ended up in the hospital. Instead, it starts with her leaving the hospital. It would’ve been nice, if started with some development. It would’ve made the story and her character interesting instead of rushing out to get to the main character’s house and his relationship with this mother. It also happened with in the development of a couple of other scenes in the beginning, as the first fifteen minutes felt rushed. Thankfully, the story gets back on track but the first fifteen minutes ruined a bit for me.

Is “Hard Sell” a perfect film? No, as the first part of the film was rushed and. But what made the rest of the film good and saved it from total disaster was the performances by Syler Gisonso and Katrina Bowen and Sean Nalaboff’s direction. “Hard Sell” is currently playing in limited release and VOD.