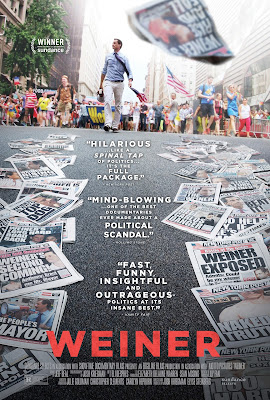 "Weiner" is currently playing  in limited release and hits VOD on May 26th.

Anthony Weiner was a young congressman on the cusp of higher office when a sexting scandal forced a humiliating resignation. Just two years later, he ran for mayor of New York City, betting that his ideas would trump his indiscretions. He was wrong. With unprecedented access to Weiner, his family and his campaign team, WEINER is a thrilling look inside a political comeback-turned-meltdown. What begins as an unexpected surge to the top of the polls takes a sharp turn once Weiner is forced to admit to new sexting allegations. As the media descends and dissects his every move, Weiner desperately tries to forge ahead, but the increasing pressure and crippling 24-hour news coverage halt his political aspirations. With the city of New York as a loud and bustling backdrop, Weiner walks the line between political farce and personal tragedy as it plunges through an increasingly baffling political campaign with unflinching clarity, humor, and pathos.