"Everybody Wants Some!!" Review by Tim Hellman 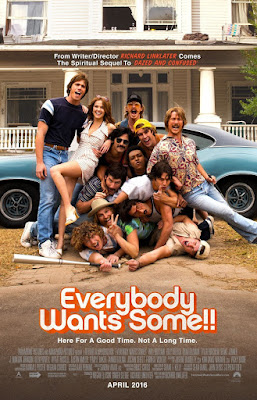 'EVERYBODY WANTS SOME!!': Four and a Half Stars (Out of Five)

Richard Linklater's new nostalgic coming-of-age flick; this one is about a Texas college baseball team, in 1980. Linklater wrote and directed the film, and it's been called a 'spiritual sequel' to his 1993 cult classic 'DAZED AND CONFUSED'. Linklater also considers it a sequel to 'BOYHOOD'; because it picks up at the time, in a young man's life, when that movie left off. The film stars Blake Jenner, Glen Powell, Zoey Deutch, Tyler Hoechlin, Ryan Guzman, Wyatt Russell and Will Brittain. I enjoyed the movie, and think it's classic Linklater!

The film is set in 1980 Texas; at an old house, that college baseball players live in (due to the school's dorm facilities being overfilled). It revolves around a new freshman pitcher, named Jake (Jenner), that just moved into the house. He meets his teammates, and parties with them (before school starts). Jake also falls for a female college student, named Beverly (Deutch), that lives nearby.

The film has no story, or direction (of any kind); it's also slow-paced (because of this), meandering and long (at nearly 2 hours). Despite all these flaws, I enjoyed it. It's funny, and it has a great 80s/70s nostalgic feel to it; it kind of reminds me of the 80s teen sex comedy flicks that I grew up on. It's definitely not as good as 'DAZED AND CONFUSED', or 'BOYHOOD', but it is an entertaining movie.
at 2:44 PM
Labels: Everybody Wants Some!!, Paramount Pictures, Reviews, Richard Linklater