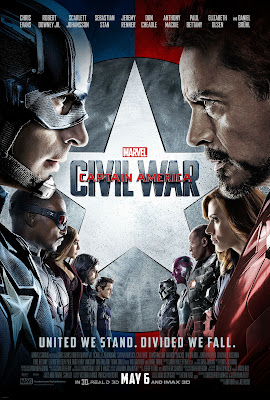 Due to the large number of civilian deaths, as a result of The Avengers' battles with various super-villains (over the years), the United Nations wants to form an international governing body, to control the superheroes' actions. Captain America (Evans) is against it, since he thinks they have better judgment than corrupt government officials, whereas Iron Man (Downey Jr.) supports the supervision (due to guilt over creating Ultron, and other tragedies he's responsible for). Other Avengers divide in the conflict, forming two different factions. At the same time Bucky Barnes (Stan) is framed for a bombing in Vienna (which kills a Wakanda King). Captain America wants to protect his friend, while government officials want to kill him. A civil war between the superheroes erupts.

This film gets everything right that 'BATMAN V SUPERMAN' did (one of my other favorite movies this year); it's very dark, dramatic and full of rich character development (all things 'AVENGERS: AGE OF ULTRON' got wrong). The plot is involving and the action actually serves the story; rather than vice versa! The action scenes are also really cleverly done, and exciting; something increasingly hard to pull off, in modern blockbusters. Downey Jr. actually gives a really good performance again (and he doesn't deliver any horrible jokes, for a change). It's also interesting to see his character as the antagonist; I know he was more of a villain in the comic book, but I think it was smarter for the filmmakers to make the drama (in the film) more nuanced. The movie's politics are also timely and complex. It's just a grade A film all around; I think it's my second favorite Marvel Studios film (after 'GUARDIANS OF THE GALAXY'). It's one flaw is that they got Spider-Man wrong though; they made some major changes to the source material, that any fan should be pissed about. I think his character is the worst of the three movie adaptations (and he deserves his own fucking movie to debut in, he's not second banana to 'THE AVENGERS')! Overall the film is fantastic though.
at 11:32 AM
Labels: Anthony Mackie, Captain America: Civil War, Chris Evans, Jeremy Renner, Marvel Studios, Paul Rudd, Reviews, Robert Downey JR., Scarlett Johansson