"A Hologram for a King" Review by Tim Hellman 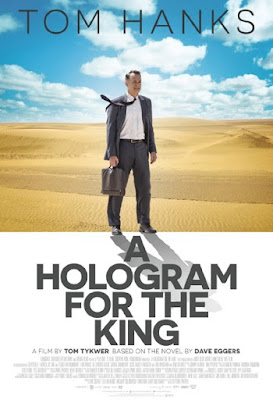 'A HOLOGRAM FOR THE KING': Three Stars (Out of Five)

The new quirky (and very bizarre) comedy-drama flick, from writer/director Tom Tykwer (who also wrote and directed the indie cult classic 'RUN LOLA RUN', and co-wrote and co-directed 'CLOUD ATLAS'). The lead of 'CLOUD ATLAS', Tom Hanks, stars in this movie as well. He plays a down on his luck American businessman, that travels to Saudi Arabia; to try and sell an idea of his to the government there. The movie co-stars Alexander Black, Sarita Choudhury, Sidse Babett Knudsen and Tom Skerritt. It's based on the book, of the same name, by Dave Eggers. I really wanted to like this movie, but it's way too slow-paced and uninvolving.

The story is set in 2010 Saudi Arabia. A failed American businessman, named Alan Clay (Hanks), has traveled there, to try and make a business deal with a rich monarch. He's heartbroken, over a recent divorce with his wife, and thinks about his daughter constantly. Alan develops new relationships, during his business trip, as he desperately struggles to sell his product.

The movie is definitely very quirky and strange, and I love quirky and strange. It's also very slow-paced, meandering and uninvolving though. Hanks does his best in the lead, and the supporting cast is all good as well, but the film is just plain boring (it's hard to sit through). I like Tykwer's other work, especially 'CLOUD ATLAS' and 'RUN LOLA RUN', so I hope his next movie is a big improvement over this.
at 11:39 AM
Labels: A Hologram for a King, Reviews, Roadside Attractions, Sabin Entertainment, Tom Hanks