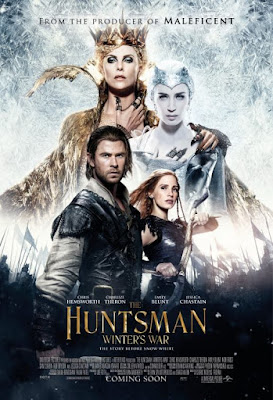 'THE HUNTSMAN: WINTER'S WAR': Three Stars (Out of Five)

A spin-off to the 2012 fantasy adventure flick 'SNOW WHITE AND THE HUNTSMAN'; which serves as a sequel, and a prequel, to that hit film. The story was once again based on characters from the classic fairy tale 'Snow White' (by the Brothers Grimm), as well as 'The Snow Queen' (by Hans Christian Anderson). It was scripted by Evan Spiliotopoulos and Craig Mazin (this time around), and directed by first time feature filmmaker Cedric Nicolas-Troyan (who also did visual effects on the first movie). The story deals with the Huntsman (once again played by Chris Hemsworth) taking on a vengeful ice queen, named Freya (played by Emily Blunt); who's also the sister of the evil queen from the first movie, Ravenna (once again played by Charlize Theron). He has help from another female warrior, he also loves, named Sara (played by Jessica Chastain). Nick Frost also reprises his role, as the dwarf Nion. Kristen Stewart does not return as Snow White, although the character is mentioned (and briefly seen, from behind). I was a big fan of the original movie, when it came out, not so much this one.

The film begins before (most of) the events of the original movie; with the sorceress Ravenna (Theron) becoming queen, by killing her husband (Robert Portal). Ravenna then also kills her sister's baby, in fear that she'll grow to become more beautiful than her (as her magical mirror warns). Ravenna's sister, Freya (Blunt), then becomes a powerful, and very vengeful, queen (of her own kingdom); ruling with deadly ice powers. She begins enslaving children, and training them to be obedient warriors; while also forbidding them from falling in love. When two warrior Huntsmen, Eric (Hemsworth) and Sara (Chastain), defy Freya's orders, she casts a powerful spell; which makes Eric believe Sara is dead. Eric then makes it his mission to stop the evil ice queen.

The film has great visuals, and the cast couldn't be better (I'd trade Kristen Stewart, for both Jessica Chastain and Emily Blunt, any day). They're all wasted in this movie though, and Charlize Theron is barely in it (despite her demands for a $10 million payday; equal to Hemsworth's, who's on screen about four times as much). Theron was the best part of the original film, and she's awesome in this follow-up as well; I just wish they would have used a lot more of her. As it is, the movie is very slow-paced; and completely uninvolving. I hope the next spin-off is all about Queen Ravenna!
at 6:55 PM
Labels: Charlize Theron, Chris Hemsworth, Emily Blunt, Jessica Chastain, Reviews, The Huntsman: Winter's War, Universal Pictures