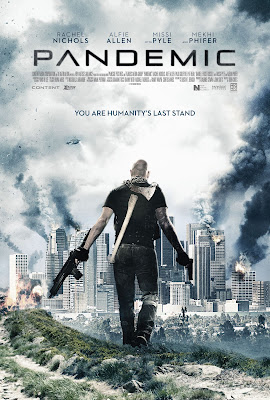 'PANDEMIC': Four Stars (Out of Five)

A zombie flick, filmed largely in the first-person point of view format. It was directed by John Suits (an experienced low-budget horror movie director), and written by first-time screenwriter Dustin T. Benson. The film stars Rachel Nichols, Alfie Allen (of 'GAME OF THRONES' fame), Missi Pyle, Mekhi Phifer (who also costarred in the popular 2004 zombie flick remake 'DAWN OF THE DEAD'), Paul Guilfoyle and Pat Healey. It tells the story of a doctor, that's sent into a heavily infected area of Los Angels; to find uninfected survivors, in hopes of finding a cure. I think the film's story, and characters, are somewhat routine; but I really like it's creative new visual storytelling style!

The story is set in the not too distant future, when most of the world's population has been infected by a zombie virus. A doctor, named Lauren (Nichols), has just left New York, which has been completely wiped out by the deadly outbreak, to aid a special survival unit in Los Angeles. Her mission, is to lead a team into a heavily infected part of town; to find uninfected survivors, and bring them back alive (for research). Hopefully a cure can be found, in their uncontaminated blood.

Like I said, there's absolutely nothing new (or especially creative) about the film's story. The characters are also kind of dull, and uninspired. The performances are decent though, and the cast is pretty impressive (for a low budget B-zombie flick, like this). What's most impressive about the movie, is it's visuals though. Filming it largely like a video game, definitely gives the movie a unique twist; and it's set for release, just a week before 'HARDCORE HENRY' (which is entirely shot in the first-person POV perspective). Since it hasn't been done dozens of times before (yet), the film is a pretty entertaining horror flick experience.
at 3:46 PM
Labels: Pandemic, Reviews, RLJ Entertainment