Get Bewitched with Jim Wynorski's "Sorceress" on DVD & Blu-Ray 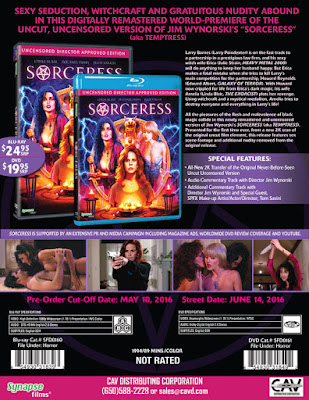 Larry Barnes (Larry Poindexter) is on the fast track to a partnership in a prestigious law firm, and his sexy witch wife Erica (Julie Strain, HEAVY METAL 2000) will do anything to keep her husband happy. But Erica makes a fatal mistake when she tries to kill Larry's main competition for the partnership, Howard Reynolds (Edward Albert, GALAXY OF TERROR). With Howard now crippled for life from Erica's dark magic, his wife Amelia (Linda Blair, THE EXORCIST) plots her revenge. Using witchcraft and a mystical medallion, Amelia tries to destroy everyone and everything in Larry's life! All the pleasures of the flesh and malevolence of black magic collide in this newly remastered and uncensored version of Jim Wynorski's SORCERESS (aka TEMPTRESS). Presented for the first time ever from a new 2K scan of the original uncut film element, this release features sex scene footage and additional nudity removed from the original release.
at 3:14 PM
Labels: DVD/Blu-Ray News, Sorceress, Synapse Films