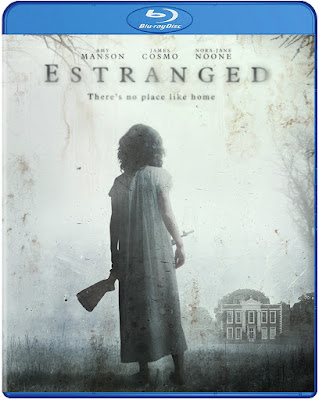 When I first heard about “Estranged”, I was interested in checking this film out. It was coming from on the producers of “Insidious” and “The Devil Inside” plus it looked like it was going to a gothic feel from the cover art. Sadly it didn’t feel that way, as that was the least of its problems.

The film is about a woman (Amy Manson) who goes home after getting into an accident that leaves her paralyzed. To make matters worse, she has also lost her memory and remember her family. She soon finds out that she is locked in her room at night and having to deal with a sister who hates her, a brother who has strange feeling for her and her parents hiding a dark secret about her past. As she becomes desperate to find out who she is, she goes down a dark path will secret in order to find out answers to her past before it’s too late.

I don’t know what I was thinking when I decided to review this film, because “Estranged” was very boring to watch. It was one of those films where you couldn’t wait for it to end, as nothing in this film worked for me. Not the direction and surely not the screenplay.

Most of it had to do with the film’s flat direction. Adam Levins direction felt very flat and lifeless. It was one of the reasons why everything moved very slowly. Whether it’s the way he handles the scenes on the paper to making the action feel dull, it had the type of feel that would put you to sleep. I wished some of the scenes would’ve moved a lot quicker to keep everything moving along. It might at least kept me interested given the film’s very bad screenplay but it didn’t. The other thing that I didn’t like was the fact the performances felt like they were running on one note. Levins doesn’t do anything to make the performances interesting. Instead, it looked like the cast didn’t want to be there as everyone was going through the motions. This made some of the film’s main dialogue scene feel dull. When that happens, it’s hard to get into any film. Sadly, it seems to happen a lot with films like these where the story is in one place and the performances mimic the isolation.

But that isn’t the major grip that I had with this film, as the screenplay was far worse. One of the things that I hated about it rushes everything including in the beginning as we have to get to main location of the film in under ten minute without setting up the main character. When that happen, it’s very get into any film. You need character development to make a film interesting. This doesn’t have any as it offer nothing about the main character expect a childhood event that made her run away. That’s not even the biggest complaint about this screenplay. My biggest complaint is there was no tension to any of the scenes. It goes back to what I was talking about, it rushes everything. Every time something is built up, it quickly ended. You need things to build up, in order to make the scenes work. This film had none of that, as it was rushing through everything leading up to scenes that slowed the film down.

Enough with this film, as it’s taken away ninety plus minutes of my life. Please avoid “Estranged”, as this is a very dull film that rushes everything and would make you fall asleep.