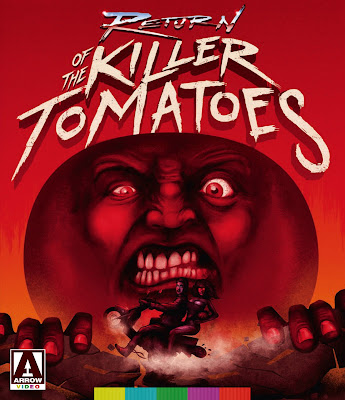 "Return of the Killer Tomatoes" hits retail on June 28th.

The Vegetables Of Doom!

The killer tomatoes are back! But this time around, they're going to have to contend with late '80s George Clooney and his wicked mullet... Is it a fruit? Is it a vegetable? Nope, it's Return of the Killer Tomatoes!

Ten years on from the Great Tomato War, mankind lives in fear of another uprising by the waxy red menace. Meanwhile, Professor Gangreen - played with gusto by John Astin from TV's The Addams Family - sets out to pursue his own evil ends by creating a burgeoning army of tomato militia men (who, somewhat conveniently, look just like regular men).