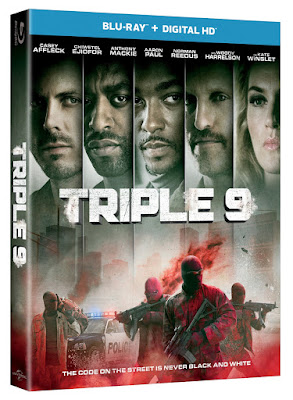 Special features on the DVD & Blu-Ray includes Deleted Scenes, Under the Gun (The acclaimed cast of Triple 9 offers an in-depth look at its characters and the pulse-pounding twists and turns at the heart of the film.) and Authentic World (Director John Hillcoat and the cast of Triple 9 discuss how their grounded approach to filmmaking helped highlight the film's gritty, authentic look and feel.).

When a veteran cop and his rookie nephew discover a shocking conspiracy that leads dangerously close to home, they'll stop at nothing to get to the truth in Triple 9, an action-packed tale of corruption and betrayal coming to Digital HD on May 17, 2016, and Blu-ray™, DVD and On Demand on May 31, 2016, from Universal Pictures Home Entertainment. Propelled by John Hillcoat's (The Road, The Proposition) ferocious directorial style and a top-notch cast, Triple 9 races through a world where no one can be trusted in a "crime caper like no other" (Peter Travers, Rolling Stone). Triple 9 on Blu-ray™, DVD and Digital HD includes deleted scenes and a peek backstage at the making of the most original cop thriller in years.

Woody Harrelson ("True Detective," The Hunger Games series), Anthony Mackie (Avengers: Age of Ultron, The Hurt Locker), Chiwetel Ejiofor (12 Years a Slave, The Martian), Aaron Paul ("Breaking Bad," Need for Speed), Norman Reedus ("The Walking Dead," The Boondock Saints), Casey Affleck (Out of the Furnace, Gone Baby Gone) and Kate Winslet (Steve Jobs, Titanic) star in an explosive, action-packed thriller critics call "a twisty, terrific ride" (Peter Travers, Rolling Stone). A bank robbery is just the tip of the iceberg when two cops in Atlanta begin suspecting that members of their own team are involved. Not knowing whom to trust and how deep the corruption goes, the clock is ticking as they try to uncover the truth — before they become the target for the next deadly job.