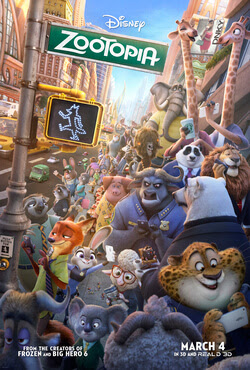 'ZOOTOPIA': Four and a Half Stars (Out of Five)

The 55th feature film from Walt Disney Animation Studios. This one revolves around a world of anthropomorphic animals; where a cop bunny teams with a con artist fox, to solve a missing animal case. It was directed by Byron Howard and Rich Moore, and co-directed by Jared Bush (the trio also co-wrote the movie, with 5 other writers). The film stars the voice talents of Ginnifer Goodwin, Jason Bateman, Idris Elba, J.K. Simmons, Jenny Slate, Nate Torrence, Octavia Spencer and Tommy Chong. It's received nearly unanimous rave reviews from critics, and I have to agree; it's one of the best films of the year (so far)!

Judy Hopps (Goodwin) had always dreamed of becoming the first rabbit police officer (since childhood). When her dreams finally come true, she's assigned to work at the Zootopia police department. Zootopia is a large metropolis; of all kinds of different mammals. Judy is (of course) initially met with a lot of skepticism (and prejudice). She tries to prove herself, by solving a missing otter case. She teams up with a clever con artist fox, named Nick Wilde (Bateman), in order to do so.

The film is beautifully animated, and full of colorful (likable) characters. It's both funny and surprisingly touching; but what's most beautiful about the movie, is it's insightful message about bigotry. You can never judge anyone by their appearance, or social background, and what better way to illustrate that message to kids; than with a world full of various types of animals. I love this movie, because of that message (it's one that means a lot to me), and I don't usually love Disney animated films. This one is pretty important.
at 11:55 AM
Labels: Ginnifer Goodwin, Idris Elba, J.K. Simmons, Jason Bateman, Reviews, Walt Disney Pictures, Zootopia