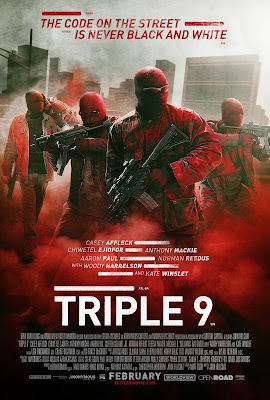 The story takes place in Atlanta, Georgia; where Michael Atwood (Ejiofor) leads a team of criminals in a daring bank robbery. They're objective is to retrieve a safe deposit box; which contains information vital to freeing a convicted Russian Mafia boss. Michael takes the box to Irina Vlaslov (Winslet), the mob boss's wife, but she insists they perform another job for her. She next wants the gang to steal more important data (on her husband), from a secured government building. Irina kills one gang member, and threatens to take Michael's son; in order to get the criminals to cooperate. The group devises a plan to kill a cop (a Triple 9 police call), as a diversion. Gang member Marcus Belmont (Mackie), a corrupt cop, suggests they kill his new partner, Chris Allen (Affleck).

The movie is very dark, gritty and graphically violent; it also contains explicit sex, nudity, disturbing drug use and lots of foul language. It's definitely not a movie for everyone, but the right audience should get a big kick out of it. Some of it seems pretty intense and hard to watch; but it also feels like a movie (like a really good crime action flick). The pacing is great, the performances are all good and the dialogue is witty. The film definitely has it's flaws too though. It's an especially odd mix of genre pleasing action formula, and realistic crime thriller; but I really enjoyed it.
at 10:20 AM
Labels: Aaron Paul, Anthony Mackie, Chiwetel Ejiofor, Gal Gadot, Kate Winslet, Norman Reedus, Open Road Films, Reviews, Triple 9, Woody Harrelson