"The Witch" Review by Tim Hellman 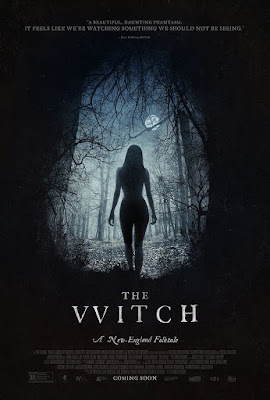 'THE WITCH': Four and a Half Stars (Out of Five)

Critically acclaimed indie horror flick, from debut feature filmmaker Robert Eggers. It tells the story of a deeply devout Christian family, living in the wilderness (of 1630s New England), that are terrorized by a witch (and other evil forces). The movie stars Anya Taylor-Joy, Ralph Ineson, Kate Dickie and Harvey Scrimshaw. It was made on a budget of just $3.5 million, and received rave reviews from critics (but poor reviews from theater audiences). I enjoyed it quite a bit.

William (Ineson), and his family, leave the New England plantation they're staying at (in 1630), and head out to the edge of the wilderness, to start life over there. William and his wife Katherine (Dickie) have their fifth child together, named Samuel, but he immediately goes missing. Katherine blames her oldest daughter, Thomasin (Taylor-Joy), for the baby's disappearance; since she was the one watching over him at the time. More mysterious, and very creepy, things keep happening, as the family continues to turn on each other; while always trying to stay true to their faith.

The movie is very purposefully slow-paced, and it works. It's always building towards something, and always digging under the viewer's skin. What Eggers does, with such a limited budget, is extremely impressive; and the cast is all great as well. The movie is very creepy, and horrifying, while never giving the viewer any cheap thrills; it's horror done right! It also has some great social commentary, on how being deeply religious can do a lot of psychological harm; to individuals and families (the Satanic Temple even enthusiastically endorsed this movie). Being raised catholic, I'm always fascinated by (well done) religious themed movies (like this). I can understand why the average (unintellectual) viewer wouldn't like it, but everyone else should be blown away!
at 4:00 PM
Labels: A24, Reviews, The Witch