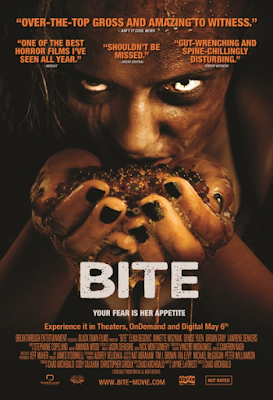 "Bite" hits theaters in limited release and VOD on May 6th.

For more information on this film, you can visit the film's official website at: http://www.bite-movie.com/

When she returns from her tropical bachelorette party getaway, a young woman begins to succumb to an insect bite in the palpably disturbing film Bite. Witness the skin-crawling chronicle of one woman's truly terrifying descent into madness when the visceral body-horror feature Bite debuts in select U.S. theaters May 6th, 2016. Directed by Chad Archibald (The Drownsman), Bite had a sensational premiere at the 2015 Fantasia International Film Festival in Montreal, where it won an Audience Award, and has recently played at numerous top international genre film festivals.