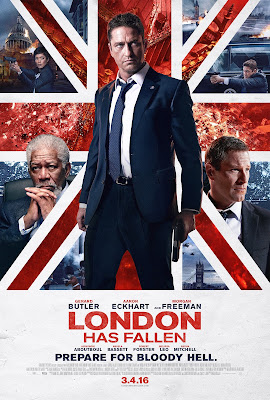 'LONDON HAS FALLEN': Four and a Half Stars (Out of Five)

Sequel to the surprise 2013 B-action flick hit 'OLYMPUS HAS FALLEN'; which (like 'WHITE HOUSE DOWN', of that same year), is basically 'DIE HARD' in the White House. This one is set on the streets of London; where Secret Service 'super agent' Mike Banning is once again defending President Benjamin Asher, from vicious terrorists. Gerard Butler, Aaron Eckhart, Morgan Freeman, Angela Bassett, Melissa Leo, Robert Forster, Radha Mitchell and Sean O'Bryan all reprise their roles (from the original film); they're joined by newcomers Alon Moni Aboutboul, Waleed Zuaiter, Mehdi Dehbi, Charlotte Riley (Tom Hardy's wife) and Jackie Earle Haley. Screenwriters Creighton Rothenberger and Katrin Benedikt once again co-wrote the movie (they also co-scripted 'THE EXPENDABLES 3'), along with Christian Gudegast and Chad St. John. Iranian-Swedish filmmaker Babak Najafi made his American film debut, directing the movie (replacing Antoine Fuqua, from the original). I really enjoyed this film!

The British Prime Minister has passed away, and all the western world leaders are invited to his funeral (in London). Mike Banning (Butler), the toughest secret service agent that ever lived, is once again escorting President Asher (Eckhart). Hundreds of armed mercenaries, under the command of a ruthless terrorist (Aboutboul), attack everyone in attendance; killing several world leaders, slaughtering hundreds of civilians and destroying multiple London landmarks. Banning will stop at nothing, to get the President out of there alive.

The movie is such a great throwback to the B-action flicks of yesteryear (especially the 80s and early 90s); back when almost everything was a 'DIE HARD' ripoff! I was so surprised at how brutally violent it is. Butler seems like he stepped out of a time machine, to play his 'badass' role! The movie is filled with cheesy dialogue, weak special effects and completely unbelievable action scenarios; but it's also relentlessly entertaining in the process. I enjoyed it a lot more than the original (and 'WHITE HOUSE DOWN' as well). It's just so much more fun than I was expecting (in a 'so bad it's good' nostalgic way)!
at 4:01 PM
Labels: Aaron Eckhart, Gerard Butler, Gramercy Pictures, London Has Fallen, Morgan Freeman