Get Ready to Have a "Search Party" in Theaters and VOD 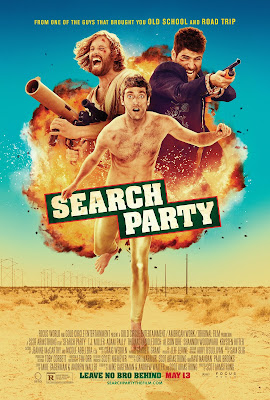 "Search Party hits theaters in limited release and VOD on May 13th.

Wedding bells threaten to break up three best friends' long-running bromance, but they aren't going down without a fight in Search Party, the directing debut of screenwriter Scot Armstrong (The Hangover Part II, Old School).

Convinced that his buddy Nardo (Thomas Middleditch) is making the mistake of a lifetime by marrying Tracy (Shannon Woodward), Jason (T.J. Miller) puts a dramatic end to their wedding. When the furious bride decides to take her Baja honeymoon solo, Nardo follows her-where the lovesick groom is carjacked and left stranded, naked and penniless in a remote part of the Mexican desert. Helpless, Nardo sends out an SOS to Jason and their pal Evan (Adam Pally), an up-and-coming ad exec slated for an important business meeting the next morning. During their ridiculous attempt to rescue Nardo, the trio embarks on a series of increasingly outrageous misadventures involving con artists, drug smugglers and even the Federales in this wild and wacky action comedy.
at 5:56 PM
Labels: Focus World, Indie News, Official Poster, Search Party