"Batman vs Superman: Dawn of Justice" Review by Tim Hellman 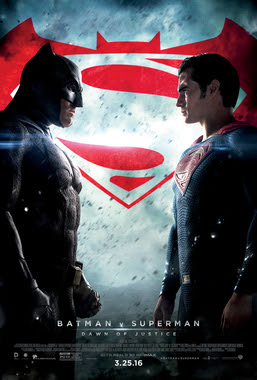 The second movie in the 'DC Extended Universe'; following 2013's 'MAN OF STEEL', and leading up to the upcoming 'JUSTICE LEAGUE' films. This superhero flick finds Superman taking on Batman, as well as his archenemy Lex Luthor. Zack Snyder (who also helmed 'MAN OF STEEL') returned to direct the movie, and Henry Cavill also returned to star as Superman (and his alter ego Clark Kent). The film was once again co-written by David S. Goyer (who also co-scripted 'MAN OF STEEL', 'BATMAN BEGINS', 'THE DARK KNIGHT' and 'THE DARK KNIGHT RISES'; all with filmmaker Christopher Nolan, and his brother Jonathan) and Chris Terrio (who won an Oscar for writing the Ben Affleck helmed 'ARGO', which also starred Affleck). The movie also costars Ben Affleck (as Batman), Cal Gadot (as Wonder Woman; in the character's live-action theatrical film debut), Jesse Eisenberg (as Lex Luthor), Jeremy Irons (as Alfred); and Amy Adams, Diane Lane and Laurence Fishburne (all reprising their roles from 'MAN OF STEEL'). The film also (briefly) debuts the characters Aquaman, Flash and Cyborb (in their live-action theatrical film debuts as well). I absolutely love this movie!

The story revolves around Bruce Wayne (Affleck), who's now a veteran vigilante (called Batman), becoming increasingly concerned about the possible dangers of Superman (Cavill); an extremely powerful alien. He travels to Metropolis, from Gotham City, to fight him. At the same time, Superman (also known as Clark Kent, in his civilian disguise) is forced to take on a new dangerous opponent; a young businessman named Lex Luthor (Eisenberg). Wonder Woman (Gadot) also joins the mix!

The film is extremely dark, and very grim; and it'll be interesting to see what the R-rated video release cut is like. It's definitely not a kids' movie, that's for sure, but neither are Snyder's earlier comic book flicks (like 'WATCHMEN' and '300'). It's brilliantly structured and paced (at 2.5 hours, the film nearly flies by). I was really happy to see the movie not get bogged down in overblown (mindless) action scenes, like so many other big-budget superhero flicks do; most notably (recently) 'AVENGERS: AGE OF ULTRON' and 'MAN OF STEEL' (actually). This film has well developed characters, and an extremely involving storyline (even though it's as dark as fuck). The action scenes are spectacular as well, when they do come, but they're actually an important part of the story (and not just pointless stupidity). The performances are all great, especially Eisenberg and Affleck; and I remember when nearly everyone thought he'd be a horrible Batman (don't hear any complaints now). Cal Gadot is also 'drop dead gorgeous' in her role (she's absolutely stunning)! It's an all around awesome superhero flick; but definitely not one for the kids!
at 6:58 PM
Labels: Amy Adams, Batman vs Superman: Dawn of Justice, Ben Affleck, Gal Gadot, Henry Cavill, Jesse Eisenberg, Reviews, Warner Brothers