Anchor Bay Entertainment Acquires Michael Moore's "Where to Invade Next" 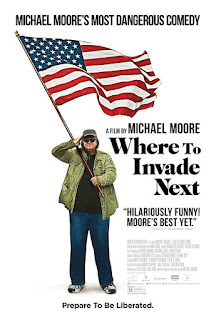 Anchor Bay Home Entertainment recently announced that they've hove video rights to the documentary "Where to Invade Next". The film is the latest film from controversial director Michael Moore, director of such films as "Fahrenheit 9/11", "Bowling for Columbine" and "Roger & Me".

No DVD or Blu-Ray release date has been set.

For more information on this film, you can visit the film's official website at:  http://wheretoinvadenext.com/

Anchor Bay Entertainment announced today the acquisition of the US home entertainment distribution rights to WHERE TO INVADE NEXT from Academy Award®-winning director Michael Moore, a provocative and hilarious comedy in which Moore will stop at nothing to figure out how to actually make America great again. Anchor Bay Entertainment, a leading distributor of independent feature film and television content, is also the home entertainment division of Starz. WHERE TO INVADE NEXT will be distributed on Blu-ray/DVD, VOD and Digital HD.

Just in time for election season, America's favorite political provocateur, Michael Moore, is back with his new film, WHERE TO INVADE NEXT. Honored by festivals and critics groups alike, WHERE TO INVADE NEXT is an expansive, hilarious, and subversive comedy in which Moore confronts the most pressing issues facing America today and finds solutions in the most unlikely places. The creator of FAHRENHEIT 9/11 and BOWLING FOR COLUMBINE has returned with an epic movie that’s unlike anything he has done before—an eye-opening call to arms to capture the American Dream and restore it in, of all places, America.

An official selection at multiple film festivals in 2015, including Toronto International Film Festival, New York Film Festival and AFI Film Festival, WHERE TO INVADE NEXT opened nationwide in theaters on February 12, 2016.

Writer, director and producer Michael Moore broke box office records with his first film Roger & Me in 1989, which gave birth to the modern-day documentary movement. Moore went on to break the documentary box office record two more times with his 2002 Academy Award®-winning film Bowling for Columbine and the Palme d'Or-winning Fahrenheit 9/11. Other notable films include the Oscar-nominated Sicko and Capitalism: A Love Story.
at 6:42 PM
Labels: Anchor Bay Entertainment, DVD/Blu-Ray News, Michael Moore, Where to Invade Next