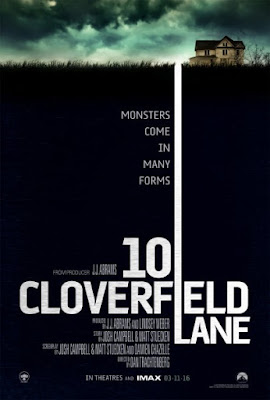 '10 CLOVERFIELD LANE': Four and a Half Stars (Out of Five)

Sci-fi sequel to the 2008 low budget monster flick hit 'CLOVERFIELD'. The film was once again co-produced by J.J. Abrams, and it was directed by first time feature filmmaker Dan Trachtenberg. It was scripted by Josh Campbell, Matt Stuecken and Damien Chazelle (the writer and director of 2014's critically acclaimed hit 'WHIPLASH'). The story deals with three survivors, trying to wait out an alien invasion in an underground bunker; only they are unaware of what the world is really like outside, and one of them might be dangerously insane. It's based on a spec script, by Campbell and Stuecken, and it's been called a 'spiritual successor' to 'CLOVERFIELD', by Abrams (but not a direct sequel). The film stars John Goodman, Mary Elizabeth Winstead and John Gallagher, Jr.. The critics have raved about the movie, and it's a huge hit at the Box Office. I loved it as well.

The story begins with a woman named Michelle (Winstead), on the run from her fiancé Ben (voiced by Bradley Cooper). While driving though rural Louisiana, her car is struck by a pickup truck; and she's knocked unconscious. She wakes up, locked up in an underground bunker; believing she's being held captive there, by a man named Howard (Goodman). Howard (Goodman), and another man there named Emmett (Gallagher, Jr.), explain to her that the world is under attack; and she's being kept there for her own safety.

I'm a fan of the original 'CLOVERFIELD', and I like this sequel even more. In some ways it's a lot like it's innovative predecessor, and in other ways it's completely different. It's made on a similar (but smaller) budget (of just $15 million), and it's set in the same world; but with different characters, a different setting, and different monsters. It's also not filmed in the same 'shaky-cam' found footage format; which I'm a fan of, but I'm happy that the filmmakers took a different approach. The acting is much better, this time around, and the characters are a lot more interesting and engaging (I also like the creatures and special effects a lot more). It's also cool how the movie makes a completely different tonal change (at the end). It's almost like two different films; which has been criticized by some, but I loved it. It's a truly great sci-fi classic (at least it will be).
at 5:56 PM
Labels: 10 Cloverfield Lane, Paramount Pictures, Reviews